Ravindra Jadeja won the Player Of The Match for his cameo knock for CSK. The win vs KKR takes Chennai to the top of the IPL 2021 table. 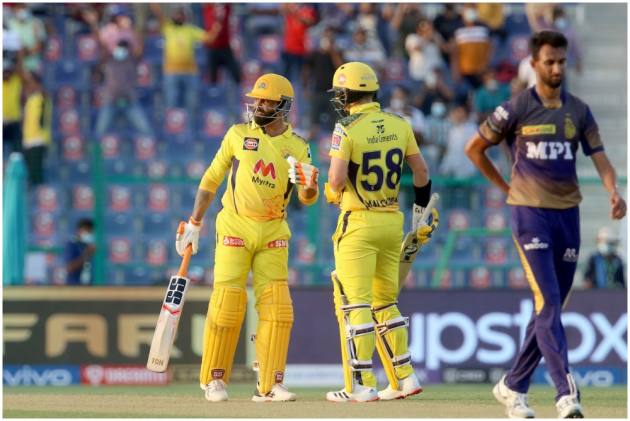 Chennai Super Kings chased down a modest 171 with two wickets to spare and the win puts MS Dhoni's team on top of the IPL 2021. Ravindra Jadeja’s invaluable contribution earned him the Player of the Match Award as well. POINTS TABLE

Speaking about the dramatic win, the left-hander said, “It is difficult after you have played five-day cricket and then to come to white-ball cricket, I was working on my bat swing. I wanted to repeat whatever I was doing.

"The runs in the second-last over turned out to be the match-winning over for us. But Rutu (Ruturaj Gaikwad) and Faf (Du Plessis) gave us a good start. You need to be collective as a unit, whether with bat or ball.

Jadeja also came good with the ball, giving away only 21 runs in his four overs. He also removed the dangerous Rahul Tripathi for 45. The left-arm spinner did not concede a single boundary or six in his spell either.

However, it was Jadeja’s antics with the bat that hurt KKR’s bowlers. Thirty runs were required from 20 balls when Ravindra Jadeja joined MS Dhoni at the crease.

However, Dhoni departed two balls later, leaving Jadeja and Sam Curran with a tough target to get. But KKR, who were once firmly in the driving seat, could only watch as Ravindra Jadeja snatched the game away from them in the 19th over.

Jadeja threw caution to the wind, milking Prasidh Krishna for 22 runs. He scored consecutive sixes off the third and fourth balls, one over long leg and the next over long-on. He followed it up with two boundaries, both behind point. Chennai Super Kings required only four runs off the last over.

Sadly, Jadeja was unable to see the win through as he departed in the penultimate ball of the final over with one run required.