Lionel Messi stepped off the bench to change the game but it was Trincao who struck a brilliant winner for Barcelona against Real Betis. 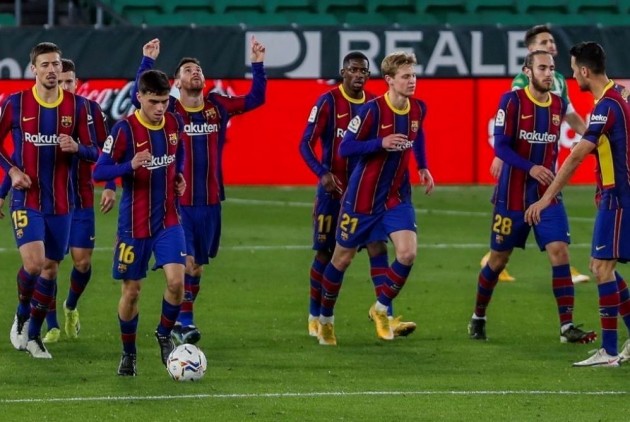 But with Barcelona trailing after Borja Iglesias struck in the first half, Koeman called on his deadliest weapon and he duly delivered, scoring a fine equaliser before playing a sublime pass to unlock the Betis defence for a second time.

Victor Ruiz put the ball into his own net from Jordi Alba's cross as Barcelona went ahead, before making amends at the other end of the pitch to head Betis level at 2-2 in the 75th minute, but Trincao struck a terrific 87th-minute winner, his shot clipping the underside of the bar as it sailed past Joel Robles.

136 - Lionel Messi ðÂÂ¦ðÂÂ· has scored just 136 seconds after coming as a substitute in this match against Betis, his fastest goal as sub for @FCBarcelona in @LaLigaEN. Solution. pic.twitter.com/9QlXz3Cjah

The visitors lost Ronald Araujo to a sprained ankle early on, then Juanmi headed wide when Betis forged the game's first real chance in the 25th minute. At the other end, Clement Lenglet should have put Barcelona ahead moments later when Alba's teasing cross picked him out six yards from goal, but he wastefully nodded wide of the left post.

Betis snatched the lead in the 38th minute when they swarmed the backtracking Barcelona defence on a quick counter-attack, Borja tucking in Emerson's low cross from the right.

Koeman's side had shown little fight until then but found more snap in the second half, yet it took the arrival of Messi off the bench in the 57th minute to bring real verve to their attacking.

He equalised within three minutes of entering the game, collecting a pass from Dembele and cracking a low shot inside the right post.

Messi was immediately picking passes and creating openings for others, scheming and menacing. The club's record scorer played in Alba with a terrific ball that allowed the full-back to cross for the goal that nudged Barcelona ahead.

Griezmann looked sure to turn it in, and although he failed to make the ideal connection, the ball ricocheted in off Ruiz.

Ruiz powered in a header from a Betis corner to interrupt Barcelona's momentum, but Trincao had the final say, the Portuguese picking an ideal moment to score his first Barcelona goal in LaLiga.

What does it mean? Messi underlines his importance

Here was a glimpse of what Barcelona may look like without Messi should they fail to persuade him to stay on for next season. It should send alarms ringing at Camp Nou, because without his introduction here they would have almost certainly lost the game.

Barca had only three goal attempts in the first half, none hitting the target, but perhaps the more intriguing statistic showed they did not commit a single foul. It was only the second time since 2012 that a Barcelona team had not fouled at least once in the opening 45 minutes of a league game - the other incidence having occurred only last month, in a 4-0 stroll at Granada.

For the 17th time this season, Trincao was introduced as a substitute in LaLiga. Koeman has yet to start a league game with the former Braga player but may soon be tempted, given the quality of his finish here. Griezmann and Braithwaite both failed to get a shot on target, the former comically so when he was helped out by Ruiz for Barcelona's second goal, but Trincao's finish was straight from the Messi playbook, a sublime arcing shot with his left foot towards the top left corner.

Braithwaite off the pace

There are reasons that Braithwaite is featuring regularly in Barcelona's attack, but here there were reasons he should not be. Signed in February last year in what was judged to be an emergency, Braithwaite has always looked like a player promoted above his station and here we are again. He has two goals in 18 LaLiga games this season, of which 10 appearances have been starts, and is netting at a rate of once every 452 minutes. Here he had one shot, that failed to hit the target, and was caught offside twice. Off he went at half-time, Pedri his replacement, and although Koeman may see it differently, it is hard for the lay observer to find a justification for him starting again.

1-1 - @RealBetis_en's Víctor Ruiz ðÂÂªðÂÂ¸ is the first player to score a goal and an own goal in a @LaLigaEN game against Barcelona in the 21st century. Redemption. pic.twitter.com/ZFDK4WtiBM

- Barcelona have won their last nine away games in all competitions, the third best streak ever for the club after 13 in 2008-09 under Pep Guardiola, and 10 in 2014-15 campaign with Luis Enrique.
- Lionel Messi has scored six goals in his last seven LaLiga games playing from the bench.
- Only Atalanta (87) have gained more points from losing positions than Barcelona (85) in the top five European leagues in the past five years.
- Trincao is the fifth Portuguese player to score for Barcelona in the 21st century. The others are: Deco (13 goals), Andre Gomes (three), Nelson Semedo (two) and Ricardo Quaresma (one).
- Borja Iglesias has scored in back-to-back games for the first time for Real Betis in LaLiga. The striker has netted four goals his last four outings, as many as in his previous 52 games.

Barcelona are back in the same city to face Sevilla on Wednesday in the first leg of their Copa del Rey semi-final. Betis are next in action at Villarreal next Sunday in LaLiga.