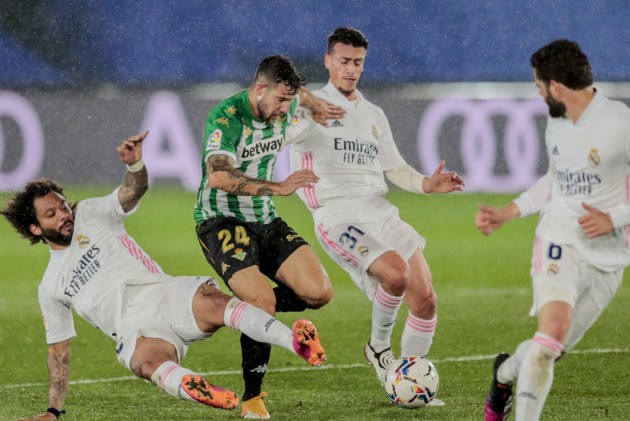 Real Madrid suffered another setback in the title race as they were held to a 0-0 draw at home to Real Betis in LaLiga on Sunday (India time). (More Football News)

Zinedine Zidane's men would have gone top – ahead of Atletico Madrid due to a better head-to-head record – at least until Sunday had they beaten Betis, but their inability to find a way past Claudio Bravo means they could end the weekend five points behind the leaders.

The contest did not truly come to life until the second half and Madrid could easily have found themselves trailing, with Guido Rodriguez and Borja Iglesias guilty of wasting great chances.

Opportunities of a similar quality were by no means a regular occurrence for Madrid, who will hoping Athletic Bilbao can do them a favour against Atletico on Sunday, with the four-way Spanish title race looking set for a thrilling conclusion.

3 - Real Madrid have drawn 0-0 in three of their last four games in all competitions (W1), as many as they had in their previous 68 matches (W45 D10 L13). Tired. pic.twitter.com/GAmoMSzHET

Madrid got very little out of Betis in what was a largely cagey first half that saw only one shot on target.

That chance fell to Karim Benzema in the 25th minute, as the Frenchman had his effort turned around the post by Bravo.

Former Madrid youngster Sergio Canales went close at the other end soon after, narrowly missing the left-hand post with a 20-yard effort.

The hosts almost got lucky nine minutes into the second half as Rodrygo's cross hit the crossbar with Bravo seemingly beaten.

Though they should have found themselves trailing a few moments later.

Rodriguez did the hard part as he raced past Eder Militao and Raphael Varane, but upon penetrating the penalty area he hit a scuffed left-footed shot straight at the relieved Thibaut Courtois.

Iglesias then spurned an even better opportunity on the break, Courtois blocking the ball as the striker attempted to prod it past him after Canales' pinpoint cross.

Much like Rodriguez, Vinicius Junior failed to apply the decisive finish after a brilliant run of his own, following it up with a feeble effort that caused Bravo no worries.

What does it mean? A title race blow and encouragement for Chelsea

While it is unlikely the title race will hinge on this result, it is another example of Madrid's imperfections – lacking ruthlessness at the business end of the season when fighting for the championship is hardly a good look.

But it is more than that. A pivotal couple of weeks are on the horizon for Madrid, with the Chelsea double-header followed swiftly by the visit of an in-form Sevilla side who have propelled themselves into title contention as well.

Madrid were lucky to avoid defeat here. They should not expect Chelsea and Sevilla to be as forgiving as Betis.

Emerson and Lainez light up the right wing

There are few players more enjoyable to watch in LaLiga than Diego Lainez when he is at his best. His footwork was a joy to behold at times here, and his two key passes were not bettered by anyone. He also linked up nicely several times with Emerson, who, as ever, was a willing runner up the right and similarly effective at the back, his five tackles more than anyone else, while only Aissa Mandi (six) could beat his four clearances.

It was a disappointing showing from the 20-year-old. Yes, he did hit the crossbar, though not even he would try to claim he meant for his cross to go that close to the goal. From his position on the right flank he failed to create a single chance and was unsurprisingly the first Madrid player to be withdrawn.

Madrid welcome Chelsea to Valdebebas on Tuesday for the first leg of their Champions League semi-final, before then also playing host to Osasuna next Saturday. Betis continue their bid for Europa League football at Real Valladolid a week on Sunday.