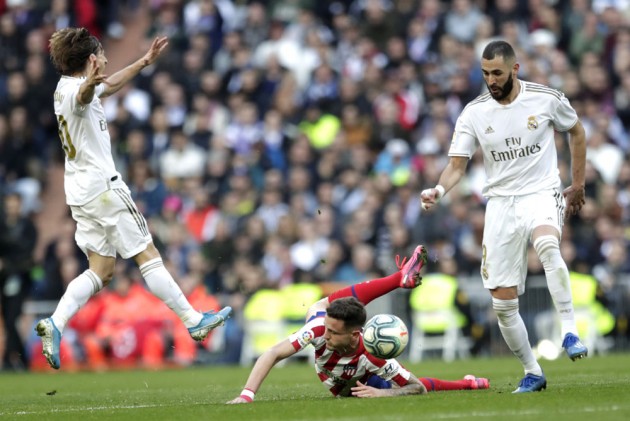 Both previous derbies between the sides this season - one in LaLiga and one in the Supercopa de Espana final - had finished 0-0 but Saturday's encounter finally bucked the trend.

Having held out somewhat in the first half, Madrid, who were buoyed by a double change from Zinedine Zidane at half-time, broke the deadlock through Benzema's first home goal against Atleti.

Substitute Vinicius Junior went close to capping a fine performance with a goal late on, but Madrid's failure to add another did not prove costly as they ended Atleti's six-match unbeaten run at the Santiago Bernabeu.

1 - @realmadriden's Karim Benzema has scored his first goal against Atlético de Madrid at Santiago Bernabéu in all competitions (16 appearances and 34 shots). Explosion. pic.twitter.com/oU8qb06H8G

Sergio Ramos scored the winning penalty in Los Blancos' shootout victory in the Supercopa final last month and Madrid's captain twice went close to opening the scoring in the first 10 minutes, but sliced over on both occasions.

Ramos had some defending to do in the 18th minute, reacting sharply to clear Madrid's lines after Thibaut Courtois had kept out Vitolo's strike.

Courtois was beaten soon after, yet Angel Correa's effort clipped the upright, before Casemiro was fortunate his desperate lunge on Alvaro Morata did not lead to a penalty.

Zidane rolled the dice at the break, introducing Vinicius and Lucas Vazquez in place of Toni Kroos and Isco, moving Federico Valverde inside and the decision almost paid immediate dividends as the midfielder forced Jan Oblak into a fine save with a superb long-range effort.

However, Zidane's changes did prove decisive in the 56th minute - Vinicius drawing three Atleti defenders in before releasing Ferland Mendy, whose cross was side-footed home by Benzema.

Oblak then denied Vinicius to keep Atleti in the game, though the visitors could not make it count as their dismal start to 2020 continued.

What does it mean? Madrid put the pressure on Barca

Quique Setien's Barca are in action against Levante at Camp Nou on Sunday and know they must respond to prevent Madrid - who are unbeaten in 13 LaLiga matches - from ending the weekend with an increased lead at the summit.

Atleti, meanwhile, have lost three of their four matches across all competitions since the Supercopa final.

Zidane's experiment of playing Valverde in a wide role in the first half was a failure, but the Frenchman spotted his mistake. Vinicius came on, adding width, pace and skill to Madrid's attack and, ultimately, played a pivotal role in Benzema's winner.

Simeone's time at Atleti winding down?

Atleti's defeat leaves them 13 points behind Los Blancos and their main aim now will be securing Champions League qualification. Despite plenty of money having been pumped into the squad, it seems Diego Simeone's impact finally seems to be wearing off and perhaps a change may be needed ahead of next season.