Vazquez headed Madrid in front six minutes into the game and Asensio added a second after the break with a fine finish. 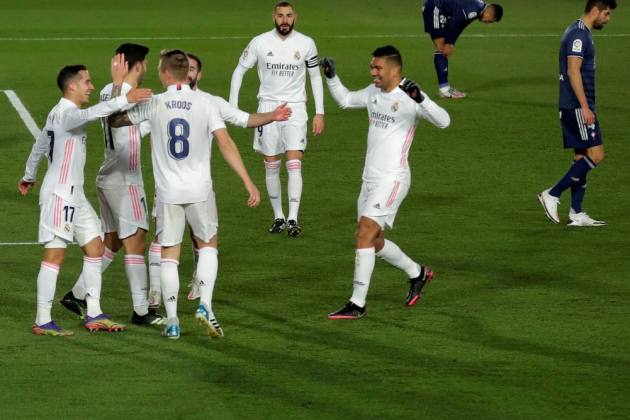 Real Madrid went top of LaLiga for the first time since October after a 2-0 win over Celta Vigo on Saturday thanks to goals from Lucas Vazquez and Marco Asensio. (More Football News)

Vazquez headed Madrid in front six minutes into the game and Asensio added a second after the break with a fine finish.

The result helped Zinedine Zidane's side move a point clear of city rivals Atletico Madrid, who will have the chance to return to the summit when they face Deportivo Alaves on Sunday.

Celta almost stole an early lead when Iago Aspas chased a ball behind the defence and chipped an effort over Courtois as he raced off his line, but Nacho chased back to hook it away.

3 - #Lucas Vázquez has scored three goals vs Celta de Vigo in all competitions, more than vs any opponent in his Top-Flight career (level vs Real Sociedad). Joker@realmadriden#RealMadridCelta pic.twitter.com/KsVPnIWc2V

From the resulting counterattack, Madrid went ahead when Asensio broke down the left and his cross picked out Vazquez, who headed in at the back post.

Madrid went close shortly before the break as Dani Carvajal saw an audacious volley from the edge of the box fly just past the post.

Zidane's side ruthlessly punished some sloppy Celta play soon after half-time, which allowed Vazquez to slide in Asensio to clinically fire past goalkeeper Ruben Blanco.

Fine play by Toni Kroos opened up the Celta defence again on the hour but Madrid captain Karim Benzema lost his footing at the critical moment and flashed his shot past the upright.

Madrid brought on Eden Hazard with 16 minutes left as the Belgian forward continued to build up his match fitness following a long-term injury.

Benzema squandered another late chance when he lifted a shot over the crossbar, while former Los Blancos youngster Miguel Baeza was denied at the death as Madrid saw the game out without conceding.

41% - The possession figure of 41% today vs Celta de Vigo is the lowest recorded in a win by Real Madrid under Zinedine Zidane at home in all competitions. Pragmatic@realmadriden #RealMadridCelta pic.twitter.com/rG886kBsDj

What does it mean? Home comforts Madrid

Madrid have scored in each of their last 29 home LaLiga games against Celta (76 goals in total), their current longest scoring run at home against a single team in the competition.

They have also won 13 of their last 15 home LaLiga games (lost two), with 14 of them played at the Estadio Alfredo Di Stefano inside their training ground, which is proving a handy home away from the Santiago Bernabeu.

Atletico still have three games in hand on Madrid, but if Zidane's side can continue to churn out these types of results on home turf then they will be the main challengers for the title.

Kroos has scored six goals in 12 LaLiga appearances against Celta, and although he did not find the net on this occasion, he was at the heart of everything Madrid did well. The German midfielder made 64 passes – more than any other player – with a pass completion of 94 per cent, while his two key passes was bettered by only Vazquez among those in white.

Aspas has been involved in five of Celta's eight goals away from home in LaLiga this season (four goals and one assist), but he managed just one shot on target before he was substituted six minutes into the second half. Had the Spain striker been able to score from that early chance, it might have given Celta a foothold in the game. Thereafter they hardly worried Courtois at all.

- Vazquez has scored and assisted in a single LaLiga game for Real Madrid for the first time since February 2018 against Leganes.
- Asensio has been involved in three goals in his last three games for Madrid (one goal, two assists), just one fewer than in his previous 31 matches for them in all competitions (three goals, one assist).
- Asensio scored and assisted in a single game for Los Blancos for the third time in all competitions, the second in LaLiga after doing so in June 2020 against Valencia (the other one was versus Melilla in the Copa del Rey in December 2018).
- Madrid had their smallest share of the possession in a single home match in all competitions under Zinedine Zidane on Saturday (41 per cent).
- Madrid have kept a clean sheet in three of their last four LaLiga home games after doing only once in their previous five at the Alfredo Di Stefano in the competition.

Madrid travel to Pamplona to face Osasuna in LaLiga next Saturday, while Celta go to Ibiza in the Copa del Rey on Tuesday, before hosting Villarreal in LaLiga three days later.