Real Madrid moved top of LaLiga for the first time since November as goals from Karim Benzema and Toni Kroos sealed a 2-1 win over Barcelona in El Clasico. 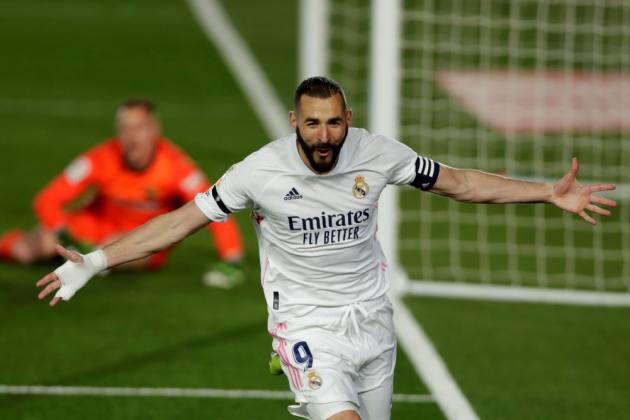 Real Madrid moved top of LaLiga for the first time since November as goals from Karim Benzema and Toni Kroos sealed a 2-1 win over Barcelona in El Clasico. (More Football News)

Fresh from their Champions League quarter-final first-leg triumph over Liverpool, Zinedine Zidane's side started in blistering fashion on Saturday and were two up inside the opening 30 minutes thanks to a sublime Benzema flick and deflected Kroos free-kick.

Oscar Mingueza set up a dramatic final half-hour with his second goal of the season and Casemiro was sent off in the 90th minute, but Madrid held on at a sodden Alfredo Di Stefano Stadium to seal a third consecutive win against Barca in all competitions for the first time since 1978.

The result means Los Blancos leapfrog Ronald Koeman's side and neighbours Atletico Madrid to the league summit, although Diego Simeone's men can reclaim top spot with just a draw against Real Betis on Sunday.

Benzema ended a run of nine appearances against Barca in all competitions without a goal – his longest such run against a single opponent as a Madrid player – in the 13th minute.

Federico Valverde released Lucas Vazquez down the right and his low cross was diverted into Marc-Andre ter Stegen's bottom-left corner courtesy of a sumptuous backheel from the Frenchman on the edge of the six-yard box.

The hosts doubled their advantage after 28 minutes when Kroos' 20-yard free-kick ended up in the back of the net via a combination of Sergino Dest's back and Jordi Alba's head.

Madrid almost made it three before the interval, but Valverde's fizzing strike cannoned back off the post and Vazquez was unable to steer the follow-up past Ter Stegen.

A subdued Lionel Messi twice went close in first-half stoppage time when his corner floated over Thibaut Courtois and bounced back off the post, while the Belgium goalkeeper thwarted him at the back post from Ousmane Dembele's corner.

Ronald Araujo diverted Vinicius Junior's cross onto his own post soon after as Madrid threatened to restore their two-goal advantage.

Barca were adamant they should have had a penalty in the closing stages when Martin Braithwaite went down under a challenge from Ferland Mendy, but referee Jesus Gil Manzano was unmoved.

Casemiro received a second yellow card for a late challenge on Mingueza, before Ilaix Moriba rattled the crossbar with almost the last kick of the game as Madrid sealed a league double over their rivals for the first time since the 2007-08 season.

What does it mean? LaLiga title race perfectly poised

There were no supporters there to see it and it was played against a backdrop of relentless, driving rain, but this was one of the best Clasico matches in years.

Madrid will approach the final eight games of the season with a spring in their step, yet Barca – whose run of nine consecutive away wins in LaLiga was brought to a crashing halt – are just a point behind Zidane's men and are still very much in the title race.

Benzema has been in majestic form this season and he set Madrid on their way to a vital win with an impudent early strike – his first in 10 matches against Barca.

In ending that run he became just the fourth Madrid player to score in seven consecutive LaLiga games this century, joining Ruud van Nistelrooy, Cristiano Ronaldo and Gareth Bale in that elite club.

With speculation rife he will leave Camp Nou at the end of the season, this could well have been Messi's final Clasico.

Messi was in the thick of the action – his seven shots was four more than any other player on the pitch and he had two key passes – but he has now failed to score in his last seven games against Madrid, which is the longest streak of his career against Los Blancos.

- Kroos is the first Real Madrid player to score a direct free kick in El Clasico in the 21st century.
- Zidane is the first Real Madrid coach to avoid defeat in five consecutive Clasicos in all competitions since Jose Mourinho in the 2012-13 season. Both men won three and drew two.
- Koeman, meanwhile, is the first Barcelona coach to lose his first two LaLiga games against Real Madrid since Joaquim Rife in 1980.
- Mingueza has scored in his first Clasico appearance. The last Barca defender to score in his first game against Real Madrid was Marc Bartra in the 2014 Copa del Rey final at Mestalla.
- Casemiro has been sent off for the second time in his Real Madrid career (478 fouls conceded). His first expulsion came against Real Valladolid in March 2019.
- This was the first time Sergio Ramos missed a league Clasico, with the defender playing in 31 straight meetings prior to this one.

Madrid will book their Champions League semi-final spot if they avoid defeat at Anfield against Liverpool on Wednesday, while Barca have the opportunity to bounce back by securing silverware next Saturday when they face Athletic Bilbao in the Copa del Rey final.