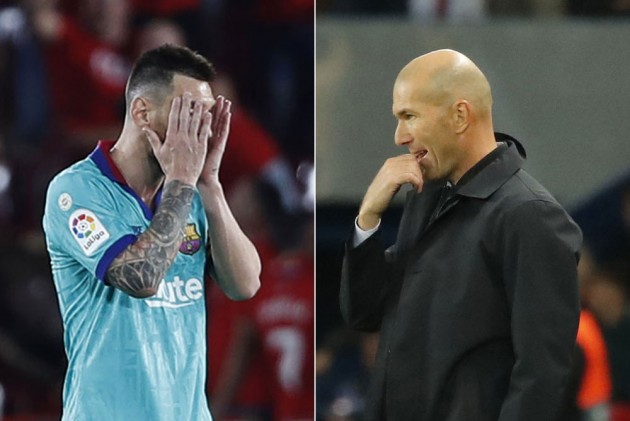 Zinedine Zidane does not expect Barcelona to be weakened by the off-field unrest that has blighted Real Madrid's LaLiga title rivals this week. (More Football News)

A potentially damaging row has broken out at Camp Nou after Barca star Lionel Messi hit back at the director of football Eric Abidal, who suggested some players were not working hard enough prior to Ernesto Valverde's dismissal as a coach.

Messi went public with his response in an Instagram post directly referencing Abidal's comments in which he wrote: "When talking about players we should give names, because if not we are all getting dirtied and feeding things that are said but aren't true".

The situation is so serious that former Barca winger Francisco Jose 'Lobo' Carrasco claimed Messi could be on the brink of exiting the club.

But Zidane did not want to wade in on the issue, which he does not believe will derail Barca's season.

Asked if Madrid could take advantage of their Clasico rivals' plight, the Frenchman said: "It's never like that, it's not about that.

"They're not going to be weak, they're a very competitive team. We're not thinking about that for one minute.

"They will compete with us until the end of the season. Good players are always good."

Turning his attention to his own team, who won the Madrid derby last time out and face Real Sociedad in the quarter-final of the Copa del Rey on Thursday, Zidane also declined to comment on Kylian Mbappe's apparent discontentment at Paris Saint-Germain.

He added: "We have good momentum, we have to keep going in the same way.

The team continued their preparations for Thursday's cup clash with @RealSociedad at #RMCity today! pic.twitter.com/Ligw7NmJNX

Madrid beat Sociedad 3-1 at the Santiago Bernabeu in November and welcome them back for a one-off clash in a competition they have not won since 2014.

Zidane anticipates a tough match against a side who sit eighth in LaLiga.

"I don't think they're going to come here and give an inch. We have to be really focused, switched on right from the start.

"It's a really good team, as they've shown all season. They play really good football. It's a team that's going to come here and try to do things well."

Zidane refused to confirm if Eden Hazard would be involved following his lengthy absence with an ankle injury.