The Brazilian had been often criticized for his lack of goals but has clearly improved, becoming an even greater threat as he continues to display amazing speed and uncanny skills. 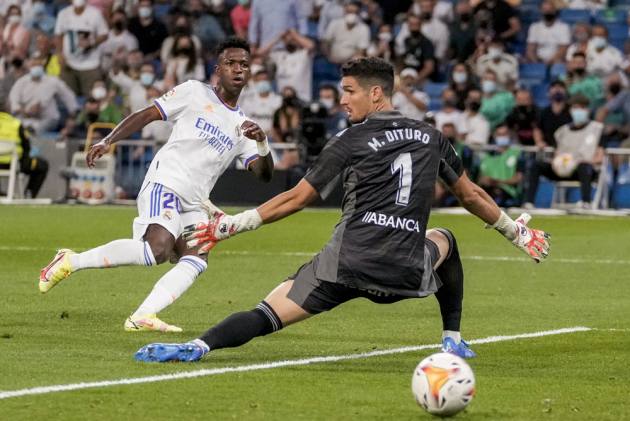 Madrid fans were frustrated with the failed negotiations to bring in Mbappé at the transfer deadline last month, but a few matches into the new season they have found that they can count on Vinícius Júnior.

The fans have embraced Vinícius Junior, and did that literally on Sunday when the young Brazilian jumped into the stands to celebrate with the crowd after scoring in the 5-2 win over Celta Vigo in the Spanish league in the reopening of the Santiago Bernabéu Stadium after more than 18 months.

Vinícius Júnior was engulfed by fans, who profusely hugged him before stewards and police officers helped him back onto the field. The visit to the stands earned him a yellow card but was a big hit with fans who hadn't been at the Bernabéu since it was closed because of the pandemic and a massive renovation project.

The 21-year-old Vinícius Júnior got off to a great start this season, scoring four goals in the first four matches and being a crucial part of Madrid's attack alongside Benzema.

The Brazilian had been often criticized for his lack of goals but has clearly improved, becoming an even greater threat as he continues to display amazing speed and uncanny skills.

“He is at a very high level right now. His quality is impressive. He has been doing very well in the beginning of the season and he has to keep it up. He is full of confidence and is very composed and calm in front of the goal.”

Vinícius Júnior, who arrived in 2018 as a teenager from Brazilian club Flamengo for nearly 45 million euros ($53 million), will be even more important to Ancelotti in the near future as forward Gareth Bale will be sidelined for a while because of a muscle injury.

Madrid has long been after Mbappé to boost its attack but couldn't get a deal done with Paris Saint-Germain last month despite an offer that reportedly surpassed 200 million euros ($235 million). The Spanish club will have to wait until next season to try to bring in the France striker, who will then be a free agent.

Ancelotti is more than happy with Vinícius Júnior and Madrid's attack for now, with the team having scored 13 goals in four matches, the most in the Spanish league so far. But the defense, without veteran captain Sergio Ramos, has struggled, conceding six times already. Madrid twice had to come from behind on Sunday against Celta.

“We were not as strong in our defensive organization and we have to improve in that area,” Ancelotti said.

“That made things tough for us.”

Madrid, which went without a title last season under coach Zinedine Zidane, is turning its focus to the Champions League and a trip to face Inter Milan on Wednesday to open its Group D campaign.

Madrid's next league match is at Valencia on Sunday. The team leads the league with 10 points, tied with Valencia and defending champion Atlético Madrid.