After a goalless draw on Sunday, Zinedine Zidane dismissed the prospect of attacking reinforcements in January 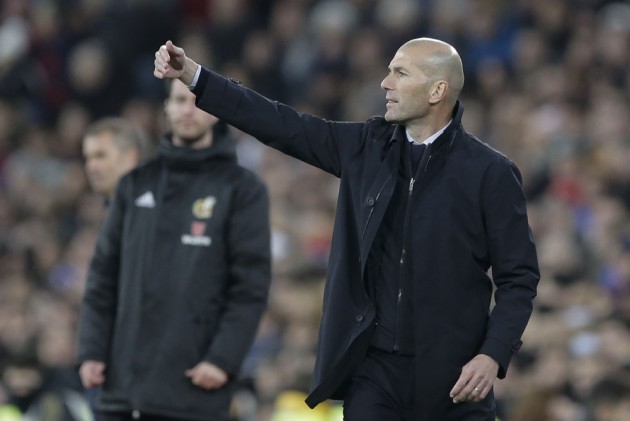 Madrid failed to score in back-to-back games after playing out a 0-0 LaLiga draw with Athletic at the Santiago Bernabeu on Sunday.

Toni Kroos and Nacho hit the crossbar either side of half-time, before substitute striker Luka Jovic was also denied by the base of the post with four minutes remaining.

Karim Benzema has shouldered the goalscoring load for Madrid this season with 12 LaLiga goals and 16 across all competitions, while big-money off-season recruit Jovic has only found the back of the net once since arriving from Eintracht Frankfurt.

Asked if he would request a new striker, Zidane replied: "No. Absolutely not, I don't see the need to sign a striker."

#Zidane: "It was a complete match in every sense. I am upset for my players, because the effort was there. They had chances, they went after the win." #RMLiga | #HalaMadrid pic.twitter.com/5Gslch631O

The stalemate against Athletic is the fifth time Madrid have fired a blank in LaLiga this season, with Zidane's men two points behind leaders Barca heading into 2020.

"I'm annoyed by this," Zidane said. "My players have left everything on the pitch. "I'm looking at the positives and the good thing is that we're doing well. Three points from nine [available in the last three games] isn't much.

"As always, when we play a game like we did and have chances [to score], I'm annoyed for the players. For the effort that we put in, we're annoyed that we didn't score the chances that we had.

"If you have chances, you have to score them, and we've had lots of the ball in the last three games and very few goals. It's not bad luck or [a lack of] conviction - the important thing is creating chances.

"We created so many chances... we're going to continue; it's going to go in [eventually]. Now it's not going in, but we can't let our heads drop. We have to think that it's been a very good year.

"We're ending a bit flat but we're looking forward to starting 2020. I don't think [the lack of goals] is a problem, but everyone has their own opinion. We're calm. What we've done in the last four or five months was good."