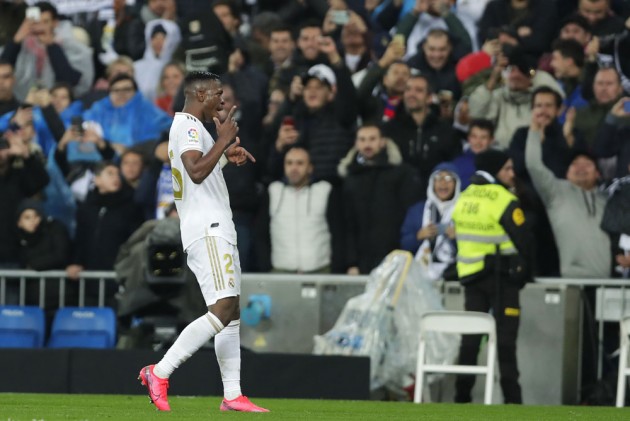 La Liga has been suspended since March due to the COVID-19 crisis, though the league is hoping to resume in June.

Madrid were two points behind defending champions and bitter rivals Barcelona through 27 matches at the time of postponement.

Coronavirus has wreaked havoc in Spain and across the globe, and Madrid star Vinicius wants to give Los Blancos supporters something to smile about.

"I've watched the games again and I think so. I think we were better than them in more aspects," Vinicius told Marca when asked if he thought Madrid were better than Barca in their two La Liga meetings this season.

"We've had very good games until now and we have to recover our best form. We're really hungry to come back, to win, and we want to win this league title for our fans. People have suffered a lot and we want to give Real Madrid fans something to cheer about in this situation.

"We know that winning the league isn't going to be a solution for big tragedies, but it would be something to smile about, something to be happy about."

There were 11 matches remaining in the 2019-20 season and Vinicius added: "The result against [Real] Betis [2-1 loss was a great shame. Now, we have a mission we can't fail. We can't fail and we're not going to fail."

"We may have only returned [to training] 11 days ago, but everyone's rhythm looks good," he continued. "We've still got lots of group work to do because we can't do it yet, but all my team-mates are very strong and very well. There's still quite a bit of work left to do, but we're feeling good."

Madrid had also lost 2-1 to Manchester City at the Santiago Bernabeu in the opening leg of their Champions League last-16 tie before the season came to a halt.

The Champions League could return in August and Brazilian forward Vinicius said: "If the Champions League returns, it will be great news not only for football, but for the world. Being able to play games in other countries will be a very positive sign because we'll be closer to normality.

"The result of the first leg [against Manchester City] was bad, but we're Real Madrid. Our obligation is to prepare ourselves well and, if this game comes, when everything is over, every Real Madrid fan can say: they gave everything, we're proud."