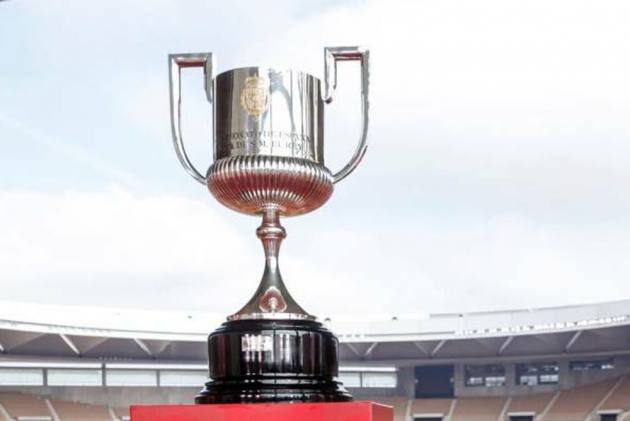 Pozas, Bilbao, could seem a peculiar place for the average football fan on the day of 'Derbi Vasco', one of Spain's most famous rivalries. (More Football News)

Approximately one and a half kilometres in length, it is a street that's littered with bars and leads directly to the home of Athletic Bilbao: San Mames, with the grilled east stand and external screen visible between the final buildings.

Which broadcaster shows the final match in your location? Check HERE

It is on this street where Athletic supporters and their Real Sociedad counterparts meet up before the derby – not to scrap, as some might expect of such an occasion, but mingle side-by-side, sing and drink, and even swap club colours before walking to the stadium. Together.

"It's like a brotherhood," Mikel Mugalari, a lifelong Athletic fan, explained to Stats Perform. "Very rarely there's fights or incidents. We don't have that kind of hatred. It's a healthy rivalry."

It is little wonder this contest has been described as the "friendly derby", or "unique" as, although passion burns strongly on both sides, there is also a sense of camaraderie and unity.

Welcome to the Basque Country.

The next time these two famous clubs meet will be in the Copa del Rey final, the first between Athletic and La Real in their current guises. It was supposed to take place on April 18 last year but, much like virtually all sporting events around the globe at the time, it had to be postponed due to the coronavirus pandemic.

As such, we are left with the slightly awkward prospect of two Copa finals in the space of two weeks. The 2019-20 edition will be played on Saturday, before this season's showpiece – which also includes Athletic, but against Barcelona – takes place 14 days later.

Sadly there will be no fans in La Cartuja, Seville, for the first final, but the occasion will be no less momentous.

Despite the obvious historic nature of it, coverage of the 2019-20 final wasn't entirely positive ahead of the initial date. The new format of the Copa del Rey – ditching two-legged ties for one-off meetings before the semi-finals – was met with much praise on the one hand in its first season last term, as it gave smaller clubs a greater chance of progression, but it simultaneously highlighted potential bias in the mainstream media.

"People are tired of so many Clasicos and want other teams to compete for the titles," La Real fan David Gonzalez said, pointing out 2010 was the last time neither of the 'big two' reached the final.

Mikel agreed as he looked back on last year's coverage. "If you talk to someone who really likes football, many say, 'Wow, finally a final without Barcelona and Real Madrid.' My kid was reading me the comments in the main national sports papers: most of the comments from Spain were saying it's not a final, no one will watch it, cancel it [because of coronavirus]. I couldn't imagine talk of cancelling [rather than postponing] a Madrid v Barca final because of the coronavirus situation. But there was lots of talk about cancelling it. Why? Because it's two smaller teams from the north, who aren't even Spanish."

The Basque Country, or 'Euskadi' to the locals, was granted autonomy in 1979, four years after the death of Spanish dictator General Franco, who prohibited the region's Ikurrina flag after defeating the Basque government's army in 1937 during the Spanish Civil War.

Although Mikel acknowledged, politically, Spain and Euskadi now find themselves in "a friendly situation", the lowest approval ratings of the Spanish monarchy are attributed to the Basque people and Catalonia, another excuse for the postponement of the final, he felt.

"It's going to be a Basque final, it's very important. In past finals there's been controversy because there's been whistles and yelling at the king," Mikel said.

"That's one of the things they don't like about this final in Spain. They were saying it should be cancelled because of coronavirus, but [in reality] don't want to have a televised final that will be viewed by millions over the world, to have whistling and yelling towards the king. What we say is, change the name [of the Copa]. That's it, it's a tournament [it doesn't belong to the king]. Change the name."

Both David and Mikel remember the respective glory days of their clubs in the 1980s when, for four years, the league title didn't leave the Basque Country.

For David, that period brought immense highs and crushing disappointment. From seeing La Real lose the title to Real Madrid in 1980 due to defeat at Sevilla on the penultimate day of the season, to then inflicting similar misery on Los Blancos a year later.

"It just seemed unfair to me, but then the next year we won LaLiga in Gijon with [Jesus Maria] Zamora's goal in the very last minute when Real Madrid, who had already finished their match, were already celebrating winning the title," recalled David, who spent his very first salary on becoming a season-ticket holder.

Similarly, the 80s bring back both great and sad memories for Mikel, his worst being the 1984 Copa final – in which Athletic actually beat Barca 1-0 – due to the apparent vilification of his team following the infamous mass brawl at the end.

But, although both men agree the 2019-20 Copa final is momentous for the obvious reasons, there is also a consensus that this is essentially as good as it gets now – there's little hope victory for either team will be the prelude to sustained success it may have been in the 80s.

"A few years ago, I would tell you yes, without hesitation," David replied when asked if final qualification was a sign of things to come for La Real, who are fifth in LaLiga but 10 points adrift of fourth-placed Sevilla. "But today, unfortunately, football has changed a lot and for a club like Real Sociedad it is more difficult to maintain a good team like the one we have now."

"Until the Bosman rule's introduction [in 1995], Athletic had chances of winning, but now we have no chance of getting better than fourth, fifth, sixth," Mikel insists.

"We'll always consider the Copa to be our competition," Mikel says with a grin, as he highlights the fact only Barca have more than Athletic's 23 Copa wins.

Athletic celebrate their greatest successes in a unique way. La Gabarra, a barge, floats along the Nervion river with all the players and coaching staff aboard, the claimed title taking centre-stage while supporters line the riverbanks and bridges to join in the party.

La Gabarra is an iconic symbol of the club but, while Mikel remembers the last time it was used, many supporters will have never experienced such an occasion, for the lack of a major title since 1984 – not including the 2015 Supercopa de Espana – has seen the tradition become legend. Younger generations are consigned to looking upon the photos decorating the walls of bars on Pozas and imagining.

If ever an occasion merited its long-awaited return to the water, it's success in an all-Basque final. Just don't expect the blue-and-white contingent of the "brotherhood" to show their faces should the Copa head to San Mames for a 24th time.