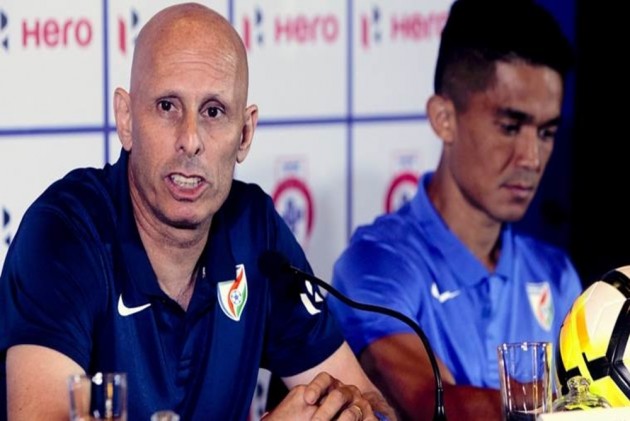 In the 2019 AFC Asian Cup, the Indian national football team dazzled with its exciting counter-attacking strategy in the first group stage fixture against Thailand. The Blue Tigers made a dream start winning 4-1. The tactical mastermind behind the success was former head coach Stephen Constantine. Under his tenure, the national team reached new heights including a FIFA ranking of 96, a high point the team hadn't reached in 21 years before that. Although India were knocked out at the Asian Cup group stage after narrow losses to hosts UAE and Bahrain, the team won hearts with Sunil Chhetri receiving particular praise for his buccaneering performances up front in attack. Constantine resigned after the tournament, but left behind a group of promising young players.

The 57-year-old Constantine, a FIFA instructor, managed India in two stints -- 2002-05 and 2015-19. Under him, India proved to be a strong team in the SAFF Championships and also stitched together a 13-match unbeaten streak that enabled them to qualify for the 2019 Asian Cup. Other than being at the helm of India, the Englishman also coached the nationals teams of Nepal, Malawi, Sudan, Rwanda, Millwall (first-team coach), Cypriot clubs APEP, Nea Salamis and Ethnikos Achna, and was the assistant manager of Greek club, Apollon Smyrni.

Outlook spoke to Stephen Constantine about his time in India, the performance in the continental showpiece, and much more. Excerpts…

On his two innings as India head coach

I look back at the two tenures and feel that both were successful, in different ways. The first time around, we were looking for kit sponsors when no one wanted to sponsor the national team. Going to Vietnam and winning the LG Cup was an amazing time, and of course, our performances at the Asian Games in Busan were good. Winning the Ian Rush trophy in Wales with our U18s and seeing those players go on to have decent careers. Being able to coach IM Vijayan, Bhaichung Bhutia, Debjit Ghosh, Shanmugam Venkatesh, Abhishek Yadav and so many more was really a pleasure.

Of course, the second time around was better in the sense that we achieved more. Obviously going to the Asian Cup Finals, winning the SAFF as well as the three mini-international tournaments. For me though, seeing so many young players go from the junior teams to the senior team was brilliant and of course, we were the second-youngest team in the Asian Cup. I was pleased that we were able to play well and show the rest of Asia that we are to be respected in home and away, something which was missing for many years.

Yes, it was heart-breaking to lose in injury time and it was a last-minute penalty. We couldn’t make it to the knockout stages. Before we left India, most people said, we will lose all three games and get beaten badly.

Look, we were amazing in the first two games (4-1 win against Thailand, 2-0 defeat to UAE), and were unlucky to not have gotten a draw against hosts UAE. Their coach Alberto Zaccheroni came up to me after the game and said, “we didn’t deserve to win this game.” We hit the post twice and missed several great chances to score but that is football and at that level, if you don’t score, you get punished. 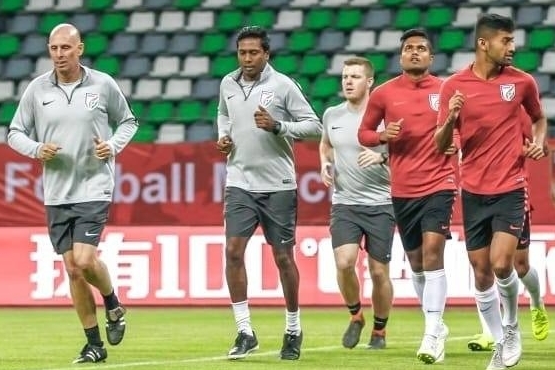 Of course, going into the Bahrain game, we needed a point or UAE needed to defeat Thailand. Thailand drew to them, and we were knocked out. I feel that knowing we needed a point to get through, played a role of course. We didn’t say, let's sit back and allow them to press us, but as full time was approaching we did drop deeper and in the end, we paid for it. I don’t blame the boys, you could see how disappointed they were in the dressing room. The opposing players came to us to offer their sympathies and said they had never seen an Indian team play like this before. Honestly, I cannot be prouder of this group of players and that loss still hurts.

On youngsters who played for India during his tenure and India’s grassroots football system...

Yes, I think we gave 49 youngsters the opportunity to play for India and while not all of them made the grade at international level, many of them have had and will hopefully continue to have success with the team.

My feeling is that India does not pay enough attention to coach education, and for sure needs to produce better quality coaches. If the young players are not taught the basic principles, how are they going to be able to perform at the international level? I feel that while India may have a lot of ‘A’ licensed coaches, in reality, the administrators need to focus on quality rather than quantity.

India needs to work with the young, up and coming coaches, who are able to understand how young players learn, how to use the technology that has become a big part of the game. Video analysis, scouting, talent identification and so on. The process doesn’t stop once you have the ‘A’ or ‘Pro’ licensed coaches. You need to continue to develop, evolve and learn. I would like to see overseas trips to European countries where the coaches can see how things work and the detail that goes into being a coach. There is so much more to it than getting a license. It is way too easy for people to get licenses and that is part of the problem.

On the tussle between Indian Super League and I-League...

I understand that the AIFF and the AFC have agreed on a pathway for the future that incorporates both leagues. For me, it is not about the ISL Vs I-League. For me, it’s about getting Indian players playing and being good enough to play in India,  and of course in other leagues around Asia and Europe, which at the moment is not happening.

Indian Super League and I-League’s impact on the national team...

ISL did have an impact on the national team, but then when you look at where some of the players came from, you have to also appreciate the I-league where many of the younger players have been nurtured. An example would be the Indian Arrows team, who under Venkatesh, played some nice football. The state leagues have also been a part of this development and pretty much everyone who is involved with Indian football just to varying degrees.

Improvements and loopholes in Indian Super League and I-League...

The arrival of foreign coaches has been advantageous for the players. The coaches have good knowledge and experience. They also try to help the Indian players. Of course, the ability of many foreign players has also helped. 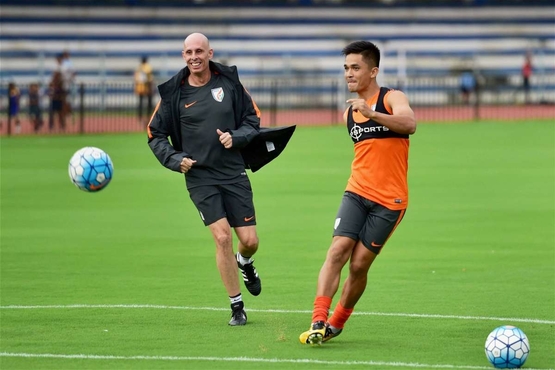 The biggest issue for me though was some foreign players would come in and have very poor attitudes and of course there are too many of them. Indian players would then suffer as coaches would play the foreigner in his preferred position and stick the Indian player anywhere thus preventing them from playing in their natural positions. So at times, you would see our Indian forward playing left-back or centre midfield to accommodate the foreign player and of course that hurt the development of the Indian player. I understand that this issue has been resolved, and it is now three foreigners and one Asian player. It should have been like that from Day 1.

Why most of the Indian U-17 players, who participated in the FIFA U-17 World Cup, haven't been able to excel at senior level...

There were many things that could have been done differently in hindsight, but I was not involved in any of it. So, it’s difficult for me to say. The fact that only a few of them are playing at any level should say it all.

On the alleged differences with Sunil Chhetri, some senior national team players regarding the shuffling of captaincy...

At my very first press conference in 2015, I stated that I will be setting up a rotational captaincy system.  My reasoning was so that we could develop other leaders on the team and to also get a fair representation of the team instead of just one player and his opinion. Giving other players the honour and the privilege to captain their country also empowers them to lead and to help the younger players.

ALSO READ: How Night Football In Jammu And Kashmir Is Bringing Relief To Sports Lovers Amid COVID-19 Lockdown

Ask Gurpreet Singh Sandhu, Pranoy Halder, or some of the others, what a feeling it was for them and their families, and how they were then able to go back to their clubs having led the country. We played the SAFF Cup in Bangladesh in 2018 and there too we gave the opportunity to several players to captain, and again ask those boys what it did for them on and off the pitch. I have done this at most national teams, I have coached and will continue to help, try, and develop leaders of men. 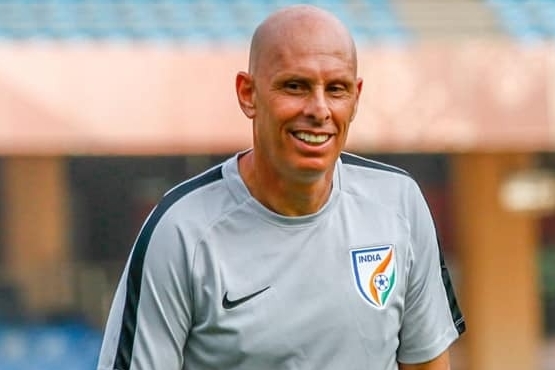 On why hasn’t India been able to find a successor for Sunil Chhetri yet….

Who says they haven’t? There are more young strikers now than ever before waiting to get their opportunity, and it was something I tried to create. For example Manvir Singh, Farukh Choudhary, and of course several others. Getting them to start in their respective clubs is the issue. When you have five to six foreign players, it is always going to be tough. However, that issue is somewhat alleviated with the reduction of the foreign players in the coming season and hopefully, we will see more of them in the future.

For me, all of the youngsters were bright prospects. Some did better than others but some players take longer to develop. Ashique Kuruniyan, Anirudh Thapa, Subhasish Bose, Germanpreet Singh, Udanta Singh, Vishal Kaith, and quite a few more, in my opinion, are good players.

I have done a number of FIFA coach education courses around the world and of course, watching games, observing training sessions and having a little break with my family. For the first time in 10 yeas I have a little break. I have also been presenting webinars on various football topics and trying to keep myself updated.