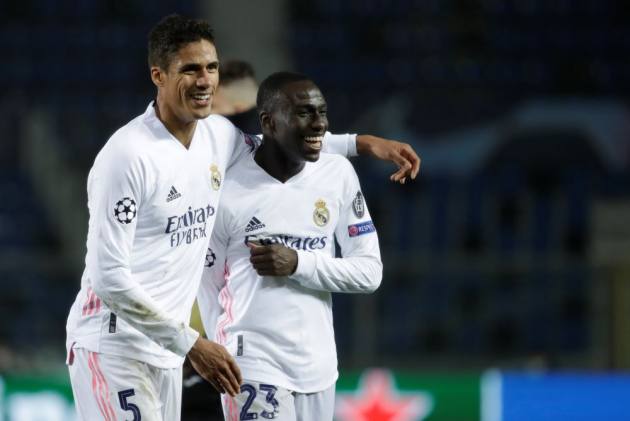 A well organised Atalanta looked set to hold on for a draw in a drab encounter at Gewiss Stadium on Wednesday despite Remo Freuler's red card for a professional foul on Mendy after 17 minutes.

Mendy's fine finish late on made it advantage to the injury-hit LaLiga champions ahead of the second leg at Santiago Bernabeu on March 16.

Los Blancos had looked devoid of ideas and could only muster four shots on target, but Mendy stunned the Serie A side in the closing stages.

Atalanta suffered a massive blow when midfielder Freuler bundled a marauding Mendy over just outside the penalty area and referee Tobias Stieler whipped out a red card.

Casemiro was also ruled out of the second leg when he was cautioned for a foul on Duvan Zapata, who was replaced by Mario Pasalic on the half-hour mark after sustaining a knee injury.

Pierluigi Gollini reacted sharply to keep out Casemiro's close-range header after Toni Kroos whipped in an inviting free-kick late in a cagey first half, which saw Gian Piero Gasperini employ Luis Muriel as a lone striker as he made a tactical switch after Freuler's dismissal.

Casemiro was fortunate not to be shown a second yellow card for simulation before Mendy won it with a superb measured right-footed finish from around 20 yards out.

What does it mean? Atalanta down but not out

Madrid will be start the second leg as favourites to advance to the quarter-finals, but Atalanta will surely fancy their chances on the evidence of this dismal game in Bergamo.

Gasperini's men did not have a shot on target in the match after going a man down so early on and Zapata's substitution was another setback.

Yet the usually free-scoring La Dea won all of their away games in Group D to reach this stage and so all is not lost despite Mendy's late winner.

Left-back Mendy not only scored his first Champions League goal in his 20th appearance in the competition, but it was also his surging run that led to Freuler being given his marching orders.

Freuler leaves Atalanta up against it

His dismissal was the earliest in the competition since Domagoj Vida was sent off 16 minutes in when playing for Besiktas against Bayern Munich in February 2018.

- Real Madrid have now won Champions League matches against 60 different teams – no side has won against more opponents in the competition (Bayern Munich also 60).

- Atalanta mustered just two shots in this match (both in the first half) – their lowest in any game in the competition. This was also the first time they failed to have a shot on target in a Champions League match.

- Madrid have won all five of their Champions League games in Italy under Zinedine Zidane, keeping four clean sheets in the process.

Depleted Madrid go in search of a sixth win in a row when they face Real Sociedad at home on Monday, while Atalanta travel to Sampdoria on Sunday.