Leroy Sane scored in an emphatic first-leg win for Bayern Munich, but he does not want to take any chances in the return clash with Lazio 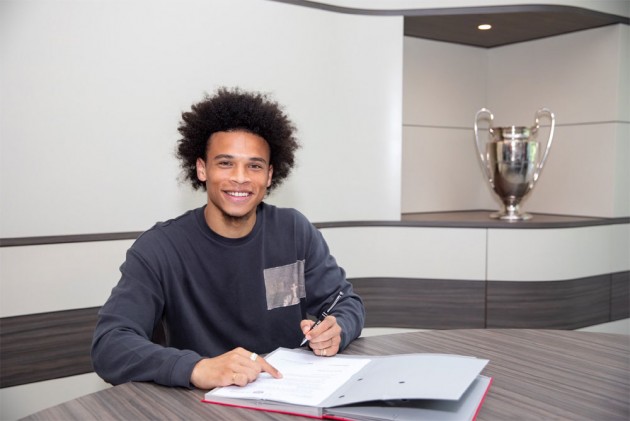 The winger joined Bayern from Manchester City after they had tasted European success by defeating Paris Saint-Germain in the final.

Sane had a mixed start at Bayern, in and out the line up as he worked his way back from a long-term injury that restricted him to two appearances in his final season at City.

The 25-year-old has looked like his old self of late, registering either a goal or assist in four of his last five matches, including a strike in Bayern's emphatic 4-1 away win in the last-16 first leg away to Lazio.

Bayern were four goals up after 47 minutes of that game, but ahead of Wednesday's home second leg against Lazio, Sane wants his team-mates to take nothing for granted, which would jeopardise his Champions League dream.

"[Winning the Champions League is] a huge goal of mine," said Sane.

"That is why I place so much value on delivering a good match on Wednesday and for the rest of the season.

"When we have Champions League matches, we need to always be well prepared and up for it.

"All of us know that a lot can still happen. Just because we scored a few goals in the first leg doesn't mean that we are through.

"Lazio have a strong team and things could backfire if we don't take it seriously.

"I'm feeling better and better, and have had time to get to know the team and how we play. We get along very well off the pitch as well. Everyone is prepared to work hard, which benefits us all.

"At first, you need to get to know the workings of a team. For me it was even harder, because I didn't have a rhythm after a long injury.

"So I needed to find my own rhythm back at first. Now I feel a lot better and I have got to know the team better. That is one of the reasons why things have gone uphill for me lately."

Bayern are hosting Lazio for the first time in European competition.

None of the last 21 sides facing them away from home for the first time in the European Cup or Champions League have won (W20 D1) since Bordeaux triumphed 2-0 back in November 2009.

"Manu has a slight cold, and Kingsley is dealing with some muscle issues," he said. "We will have to wait and see, but we are hoping that both will be able to feature on Wednesday.

"We want to win this game [the second leg] as well. We're in the midst of a good run and want to continue it.

"Especially since we're at home, we really want to win to further build our self-confidence.

"We've delivered strong performances in the Champions League, as well as in the Bundesliga. Our current aim is to continue on in this manner."

Flick was not keen to discuss the Germany job, which will become vacant when Joachim Low leaves after Euro 2020, any further.

"I have said everything about this topic, but nothing has changed for me," he said. "I do not comment on the topic."

Since Flick took charge of the club, Bayern have won their six home games in the Champions League by an aggregate score of 18-3.

However, only one of the previous six have come in the knockout stages of the competition – beating Chelsea 4-1 in the second leg of last season’s round of 16.

Lazio, meanwhile, have only won one of their last 15 away games in the Champions League (D5 L9).

The Serie A side are winless in the last eight matches of that run (D4 L4) and have not one away in the competition was back in September 2003.