Triple Olympic champion Sun Yang is facing allegations, outlined in a leaked FINA doping panel report, that he smashed vials of blood with a hammer when testers visited him last year 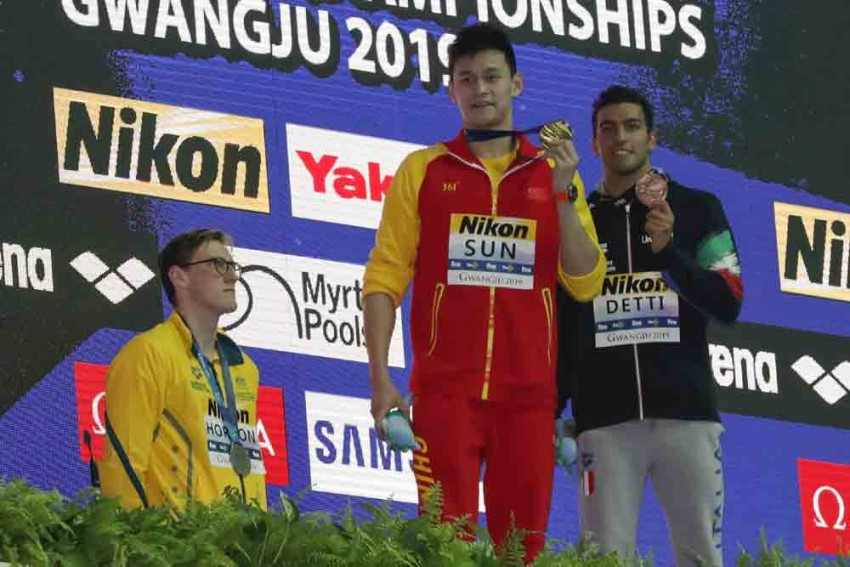 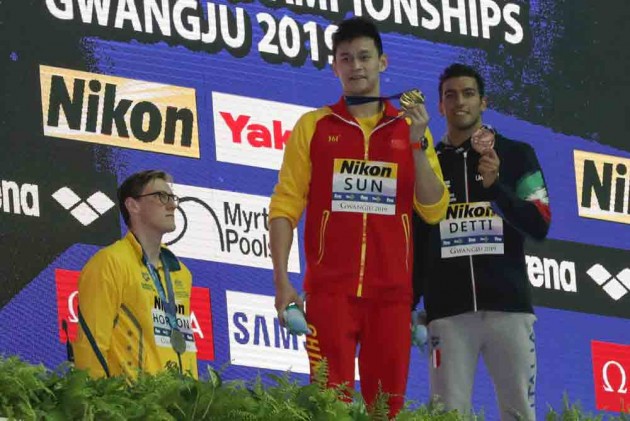 Triple Olympic champion Sun is facing allegations, outlined in a leaked FINA doping panel report, that he smashed vials of blood with a hammer when testers visited him last year.

FINA cleared Sun to compete but the World Anti-Doping Agency has appealed the decision at the Lausanne-based Court of Arbitration for Sport, putting the swimmer's career on the line.

If Sun is found guilty of a doping violation, he could face a lifetime ban after serving a three-month suspension in 2014 for taking a banned stimulant he claimed was for a heart problem.

Grevers, along with King and several other swimmers, praised Australian Mack Horton for his "risky" protest on Sunday after finishing second behind Sun in the 400m freestyle final in Gwangju, South Korea.

"We don't know if there's going to be penalties or sanctions against him (Horton) but I think he knew there were risks and felt strongly enough to still do it," said the American backstroker.

"It's obviously something he feels passionate about. I don't feel like it really hurt Sun Yang. It's just to let him know that it was a weird incident and until it gets uncovered, we don't really trust you." Australian Mitch Larkin also backed the stand of his team-mate Horton, who called Sun a "drug cheat" before beating him at the 2016 Rio Olympics -- two years after his Chinese rival tested positive for the banned stimulant.

"I think 99 percent of athletes around the pool deck back him, so he's not really standing alone. What he did was certainly brave and gutsy and I have a lot of respect for him for doing that."

Asked if he felt confident he would be competing in clean races in South Korea this week, Larkin shrugged: "You can never be confident -- I know I'm a clean athlete and do everything I can, so I just have to trust that's enough."

Olympic breaststroke champion King, one of swimming's most outspoken athletes, told reporters that swimmers at the village had applauded Horton's protest after the medal ceremony, which triggered boos from Chinese fans.

"It was awesome. Actually when he walked into the dining hall after us, the whole dining hall erupted in applause so it was pretty good to see the athletes united on his stance as well." Only last week, King hit out at swimming's governing body over its doping protocols, describing the details of Sun's alleged doping violation as "sketchy" and calling for more to be done to beat the drug cheats.

"I don't think anyone in FINA is going to stand up for the athletes," fumed King, who let rip at rival Yulia Efimova at the Rio Olympics over the Russian's previous 16-month doping ban.

"The athletes have to stand up for themselves, so I think it's definitely a start if these guys are taking a stand against doping." Olympic champion Ryan Murphy added his support.

"He's got strong beliefs and it's good he feels comfortable to stand up for those in this case -- not necessarily standing against Sun, but more against FINA and WADA (and) their responsibilities." On Sunday, Sun hit out at Horton over his podium protest, saying the Australian should have shown more respect.

"Not everyone likes me -- I don't care," said Sun, when asked about Horton's snub.

"I'm aware of the rumours and it's okay if you don't respect me personally. But at the victory ceremony -- which is a sincere occasion -- you should show respect to my country."