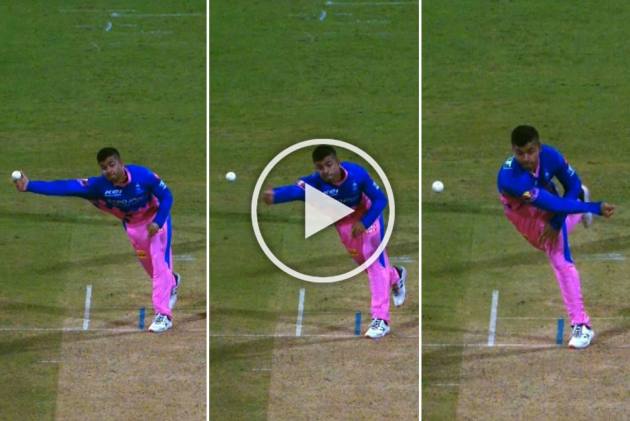 During the fourth match of Indian Premier League (IPL) 2021, Rajasthan Royals deployed Riyan Parag for one over as Punjab Kings continued to score runs at a brisk rate in Mumbai on Monday.

The move not only worked but also managed to generate enough interest from fans and pundits, forcing the IPL to take note of it in a rather cheeky way.

With Gayle looking ominous, Parag produced a round arm delivery from a very low release point in the third ball of the 10th over. It was so low that the umpire had to warn the bowler.

As it turned out, Parag then got the prized wicket of Gayle for 40 off 28 after two deliveries.

Fans soon flooded social media platforms with their won take on Parag's bowling. Some even credited Kedar Jadhav for the latest variant in bowling style.

Riyan Parag comes to bowl took a wicket of Gayle while dancing.#RRvPBKS pic.twitter.com/RYsPtdBHhl

But the best was of course from the IPL stable. It came up with a term, a "right-arm perpendicular" delivery.

That is right-arm perpendicular. What name can you think of for this unique action? #RRvPBKS #VIVOIPL pic.twitter.com/lTYuL6Xl4r

Harsha Bhogle, sharing the mic with other commentators, asked: “How low is a legal sidearm delivery?”

Former India spinner, Laxman Sivaramakrishnan exclaimed, “extraordinary" even as former Australia batsman Michael Slater said that Parag seemed to have “got away with it”.

Parag later hit 25 runs off 11 runs as the Royals came close to knocking off the target of 222 runs. Royals skipper Sanju Samson (119 off 63) scored the first century of the season, while his opposite number, KL Rahul scored 91 off 50 in the high scoring match at the iconic Wankhede Stadium.