Roger Federer is relishing another blockbuster showdown with Rafael Nadal after claiming a 100th singles win at the All England Club. 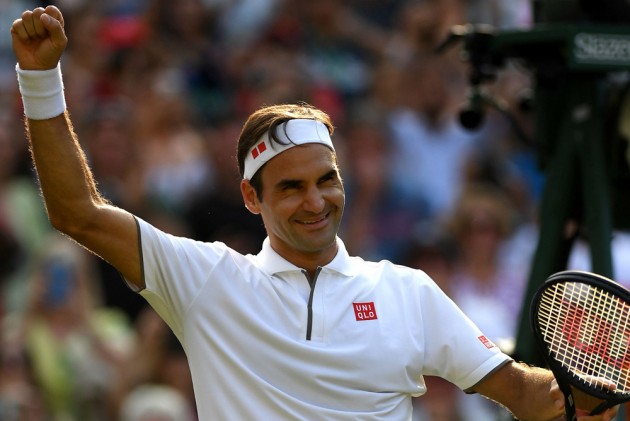 Roger Federer said he could never have envisaged winning a record 100 singles matches at Wimbledon but knows exactly what to expect from Rafael Nadal in the semi-finals.

Federer beat Kei Nishikori 4-6 6-1 6-4 6-4 to become the first man to achieve a century of victories at the same grand slam on Wednesday.

The 20-time major champion had forgotten that he had made history until he was reminded by a spectator after his latest imperious performance on Centre Court.

Eight-time Wimbledon champion Federer said: "It's special. I guess so. It's been a lot of years I've been coming here. That's given me the opportunity to win a lot naturally.

"I didn't think of it while I was playing today. Actually not at all, not once. Then as I'm signing, the guy says, 'Congratulations for your 100'. Oh, yeah, I didn't know. I forgot."

"It's nice, because if I look back at the hundred that have happened, some were so incredibly cool. Today again was a big match going into the semis, facing Rafa. Yeah, a hundred wins here at Wimbledon. Who would have thought? I didn't, for sure."

It's Federer vs Nadal. At #Wimbledon

Nadal defeated Sam Querrey to set up another blockbuster showdown with his old rival 11 years after they last met at the All England Club, when the Spaniard won a classic final.

Federer said of Nadal: "He's improved so much over the years on this surface. He's playing also very different than he used to. We haven't played each other in a long, long time on this surface.

"He's serving way different. I remember back in the day how he used to serve, and now how much bigger he's serving, how much faster he finishes points.