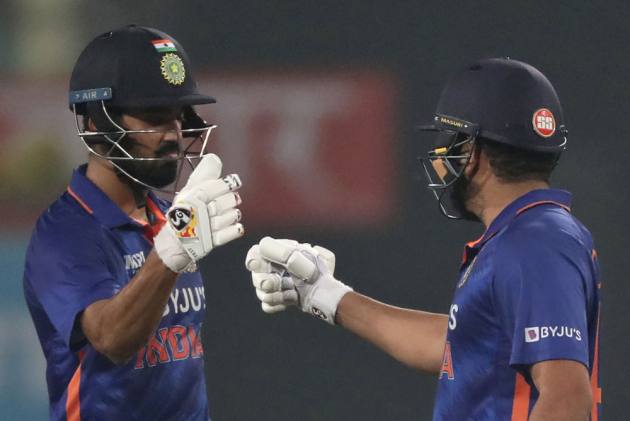 After the heart-break of ICC Men's T20 World Cup 2021, the Indian national cricket team bounced back in some style. On Friday, the Rohit Sharma-led team thrashed New Zealand in Ranchi by seven wickets to take an unassailable 2-0 lead in the three-match T20 International series.

The skipper, along with his deputy KL Rahul, ensured that the win was as dominating as possible. The openers put up a batting master class, stitching a 117-run stand in 13.2 overs in the chase of a 156-run target. The team, which failed to make the World Cup knock-outs, romped home to a big win with 16 balls to spare.

After the match, KL Rahul waxed lyrical about his captain.

They became the first Indian pair to record five consecutive 50+ partnerships in T20Is. Before the second T20I against the visiting Kiwis, Rohit and Rahul had stitched 140 against Afghanistan, 70 against Scotland, 86 against Namibia during the T20 World Cup in the UAE, and 50 against New Zealand in Jaipur on Wednesday (November 17).

Notably, the pair was separated in India's T20 World Cup match against the Kiwis, with Rahul opening the innings with Ishan Kishan. India, who had lost to Pakistan in their Super 12 opener, could manage only 110/4 in that match, and ended up suffering an eight-wicket defeat. That effectively sealed India's fate in the tournament.

But it's a  new start for the team and also for both the batters, who have been given the reins following the stepping down of Virat Kohli as the national captain in the shortest format of the game. And they have shown the intent.

During their 117-run opening stand in Ranchi, Rohit and Rahul have also equalled Pakistani pair Babar Azam and Mohammad Rizwan's record for the most century opening partnerships in the men's T20Is. Both the pairs have five each.

Rohit, who has another four 100-run opening stand with Shikhar Dhawan, now holds the record for the most 100+ partnerships in T20Is with 13.

"If there is a bowler that I can't get away, then without even me having to say it to him, he takes down that bowler. So my job becomes a bit easier and we found a way to get runs at the top of the order. Rahul said about their partnership, adding that they want to keep doing that and give "India a solid foundation".

India will look to complete a series sweep against the BlackCaps when they meet for the third and final T20I on Sunday (November 21) at the iconic Eden Gardens, Kolkata.

India have now edged past New Zealand in the T20I head-to-head record, 10-9 in 19 meetings. The Kiwis dominated the rivalry in its early years, winning the first five matches. But in the last ten meetings, India have won eight, including two Super Over finishes.

The two teams, who famously played a six-day Test to decide the inaugural winners of the ICC World Test Championship earlier this year, will face in a two-match series after the T20I engagement.