Venkatesh Iyer bowled for the first time in India colours and returned with tidy figures of 3-0-12-1, while bowling in the crucial middle overs in the third and final T20I against New Zealand. 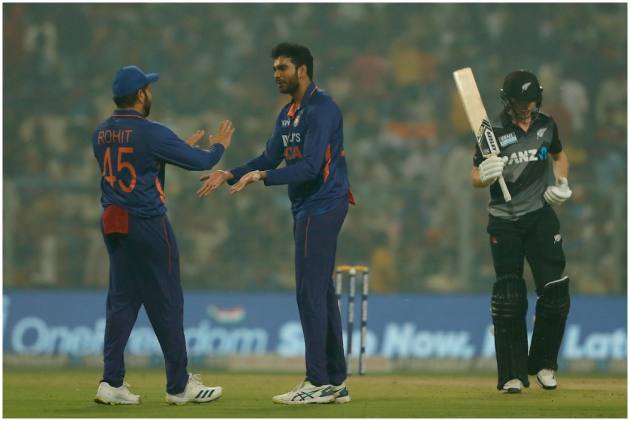 Captain Rohit Sharma was on Sunday pleased to see up and coming all-rounder Venkatesh Iyer returning with tidy figures as India completed an easy 3-0 clean sweep of the T20 International series against the visiting New Zealand at Eden Gardens in Kolkata.

After chasing down totals in the first and second matches in Jaipur and Ranchi, India, under new skipper Rohit Sharma, defended 184 for 7 to win the final T20I by 73 runs. India skittled New Zealand out for 111 in 17.2 overs.

One of the bright spots of the win was Venkatesh Iyer who bowled for the first time in his career and returned with a tidy figures of 3-0-12-1, bowling in the crucial middle overs.

"Good to see Venkatesh Iyer bowling those overs with the skills he has. Important for us going forward. I would prefer that going forward," Rohit said at the post-match presentation.

After shining bright for Kolkata Knight Riders in the UAE leg of the IPL, Venkatesh made his India debut in the series. It is widely seen that he's being groomed for the pace-bowling all-rounder's role.

Talking about the positives of the series, Rohit hailed Harshal Patel who had a dream debut in Ranchi returning with a match-winning 2/25.

The Royal Chellengers Bangalore and Haryana all-rounder also impressed with the bat lower down the order with a 11-ball 18 which was studded with two fours and one six before being out hit-wicket.

At No. 9, Deepak Chahar made a quickfire cameo of 21 not out from nine balls as India scored 50 runs in the last five overs to prop up the total.

"Teams around the world bat deep till No. 8 and No. 9. Harshal, when he plays for Haryana, opens the batting for them. And then Deepak, we've seen what he did in Sri Lanka. Chahal was looking forward to bat as well," Rohit said.

"It's important to start well. That's always been my mindset. Once you've seen the pitch you know what you've got to do. It was nicely coming onto the bat with the dew coming early. We had something planned as a batting group," said Rohit, who struck 56 off 31 balls on Sunday.

He said the secret to his clean-hitting was playing on concrete pitches while growing up.

"I've grown up playing on cement and concrete pitches back in the day and once I started opening the batting, that changed my approach.

"Picking the length, I wouldn't say it comes naturally but I've done a lot of practice playing those shots (to the short ball) but I've gotten out to that shot many times also.

"When you have a strength, you have to play to it and not worry about getting out and express yourself. Playing the short pitched ball is one of my strengths so I just try to play to that and get the maximum result."

The captain said his spinners did well in the entire series.

"The way Ravichandran Ashwin bowled, Axar Patel and how Yuzvendra Chahal came back.

"I wouldn't say it worked out well. Room for improvement in the middle order. The batting front -- KL missed out today but his form is critical. Middle order didn't get much opportunity except today."

Mitchell Santner, who stood-in as captain for New Zealand in the final T20I, said they were outplayed by an all-round India.

"They bowled very well at the top, especially Axar. Credit to India for the way they played throughout the series. We were probably off. Came up against a very good Indian side," he said.