Roma 1-1 Ajax (3-2 Agg): Serie A Side Scrape Through To Set up Manchester United Semi-final

Roma survived a second-leg scare in their Europa League quarter-final against Ajax, advancing 3-2 on aggregate after a scarcely deserved 1-1 home draw 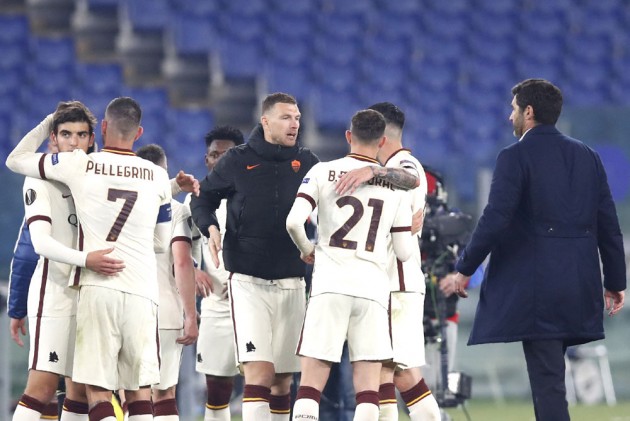 The last remaining Serie A representatives in European competition this season held a commanding position heading into the return fixture, having won 2-1 in Amsterdam a week earlier.

But Roma largely lacked ambition at the Stadio Olimpico and invited Ajax to chase the two away goals they required, the first arriving when substitute Brian Brobbey beat Pau Lopez four minutes after half-time.

A second soon after was disallowed, though, and Edin Dzeko struck to restore parity on the night and set up a semi-final against Manchester United.

30 - Edin Dzeko (30 for AS Roma) is one of the only four players able to score 30+ goals for a single Italian club among #UCL/European Cup and #UEL/UEFA Cup, level with Del Piero (46 for Juventus), Inzaghi (36 for AC Milan) and Shevchenko (33 for AC Milan). Hammer.#RomaAjax pic.twitter.com/JrytADwstR

Roma might have quickly taken the tie away from Ajax when Lorenzo Pellegrini ran from halfway following Dzeko's pass and easily skipped past Sean Klaiber, only to send a tame shot into the hands of Maarten Stekelenburg.

Jordan Veretout then had the ball in the net but was flagged offside, before Ajax secured a foothold with the help of some nervy Roma goalkeeping.

Lopez's kick was intercepted by Antony, who teed up Davy Klaassen for an effort that was well blocked by Amadou Diawara. From a similar position, Dusan Tadic shot too close to the keeper.

Lopez was punished for his next mistake, as he was beaten to Perr Schuurs' long and searching pass by Brobbey, who smartly knocked the ball beyond the Spain international into an open goal.

Only a VAR review denied Ajax a swift second, with a foul on Henrikh Mkhitaryan identified before Lopez parried Brobbey's shot straight to Tadic for a simple finish.

But Roma belatedly responded and Ryan Gravenberch inadvertently deflected Riccardo Calafiori's cross into the path of Dzeko, who made no mistake.

What does it mean? Roma not ready for Red Devils

Roma simply must be better against United if they are to retain any hope of reaching the final. Players of the quality of Bruno Fernandes, Paul Pogba and Marcus Rashford will pick off performances such as these with far greater ease if granted 71.7 per cent of the possession, as Ajax were.

The Italian side won their first meeting with United in 2007 but are winless in five games since, most notably suffering a 7-1 humbling at Old Trafford. Those painful memories will return to the fore if Roma do not improve.

Brobbey wasted on the bench

Brobbey has been Ajax's impact substitute in this competition this term. He has featured in all six of their matches without starting any of them, boosting his tally to three goals - along with one assist - with the opener on Thursday.

But only after the 19-year-old striker emerged from the bench to occupy the Roma defenders did Ajax truly threaten. Although Brobbey had only a single legal shot and 10 touches, he changed the game.

The slack pass before Klaassen's first-half chance was Lopez's first error leading to a shot in the Europa League this season. But the keeper looked shaky from the outset here and was slightly fortunate his display did not cost Roma.

Even when he made a stop from Brobbey after 56 minutes, Tadic was on hand to tuck in the rebound. A VAR review came to the rescue.

- Roma have stopped the opposition from scoring before half-time in eight of their 12 Europa League games in 2020-21. Only Arsenal (nine) and Villarreal (nine) have done so more often.
- Brobbey has scored five goals in all competitions as a substitute this season, more than any other Ajax player.
- The Ajax teenager is the youngest player with three or more goals in the Europa League this season.
- Dzeko, who netted with his only shot on target, became just the fourth player to score 30 goals for a single Italian club across the Champions League/European Cup and Europa League/UEFA Cup - also Alessandro Del Piero (46 for Juventus), Filippo Inzaghi (36 for Milan) and Andriy Shevchenko (33 for Milan).
- Roma have progressed to a European semi-final for the first time since the 2017-18 Champions League. Their previous continental semi-final was in the 1990-91 UEFA Cup when they lost the two-leg final to Inter.

Roma visit Torino on Sunday as they aim to keep their fading top-four hopes alive in Serie A, providing a distraction before the United tie. Ajax have no time to sulk with the KNVB Beker final against Vitesse this weekend.