Manchester United eased into the Europa League final as Edinson Cavani scored twice in a 3-2 second-leg loss to Roma. 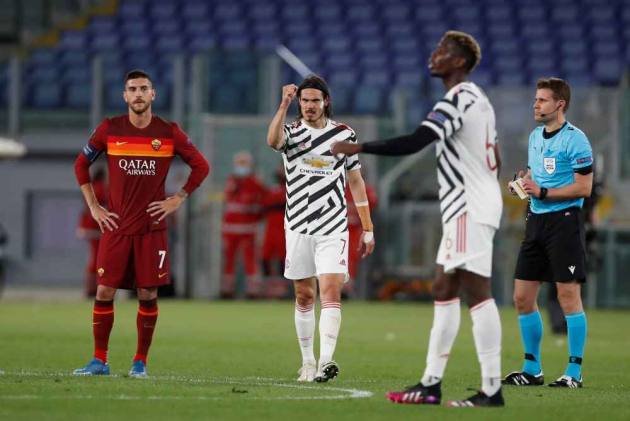 Manchester United secured a place in the Europa League final with an 8-5 aggregate victory over Roma coming after a 3-2 defeat in Thursday's second leg. (More Football News)

Despite United's commanding lead from the first leg, manager Ole Gunnar Solskjaer fielded a strong side in the Italian capital and was rewarded when Edinson Cavani opened the scoring in the first half.

Edin Dzeko, who also scored at Old Trafford, nodded in an equaliser and Bryan Cristante struck soon after to give Roma some slender hope of a famous turnaround, with David de Gea making 10 saves in total to keep the scoreline down.

Cavani headed in a second midway through the second half to ease some of the nerves for United, who will face Villarreal in what will be their first cup final since Solskjaer took over from Jose Mourinho back in December 2018, despite Nicola Zalewski's late strike deflecting in off Alex Telles to earn Roma a victory on the day.

8 - Manchester United are only the second side in UEFA Cup/Europa League history to score 8+ goals across both legs of a semi-final tie, after Alavés scored 9 against 1. FC Kaiserslautern in 2000-01. Feast. #ROMMUN

De Gea made a brilliant close-range stop from the returning Gianluca Mancini after only four minutes, and Henrikh Mkhitaryan nodded wide at the far post from a corner shortly afterwards.

Cavani sent a lob over Antonio Cristante's goal and then fired a powerful effort straight at the keeper after being put through by Bruno Fernandes' clever pass.

Roma saw Lorenzo Pellegrini thwarted at close range by De Gea as they continued to push for a lifeline in the tie, but United struck with their next chance six minutes before the break.

Fernandes and Fred combined well, the latter slipped the ball to Cavani and the striker smashed a finish past Mirante from the edge of the box.

Roma, to their credit, continued to play positively and drew level in the match 57 minutes in, Dzeko heading the ball home after Pedro had scuffed a half-volley across goal.

Three minutes later, and Roma had the lead, Cristante firing a superb first-time shot past De Gea after Fred was dispossessed on the edge of the United box.

Dzeko fired straight at De Gea from point-blank range as Roma suddenly sensed United were there to be attacked, but Cavani ghosted in behind Mancini to head in Fernandes' cross from the left and make sure of his side's place in the final in Gdansk on May 26.

Zalewski fired in a third for Roma on 83 minutes, his volley deflecting through De Gea's legs in a strike later credited as a Telles own goal, but it was not enough for the Giallorossi.

2 - Edinson Cavani is the first player to score 2+ goals in both legs of a two-legged semi-final in a major European competition since Klaus Allofs for 1. FC Köln v KSV Waregem in the 1985-86 UEFA Cup. Bracing. #ROMMUN pic.twitter.com/CRqEIfg8Pw

What does it mean? Solskjaer gets a crack at silverware at last

United slackened off badly in the second half and needed De Gea to be at his best to keep Roma from mounting a real comeback challenge.

However, that first-leg lead proved insurmountable, meaning Solskjaer has got United into the final of a cup competition at the fifth time of asking, having lost three domestic cup semi-finals in the past two seasons and at this stage of last term's Europa League.

They will face Villarreal in the final after Unai Emery's men knocked out Arsenal 2-1 on aggregate.

Cavani enjoys facing Roma and now has 13 goals against them in his career – only against Monaco has he scored more times (15). The Uruguayan is also the first player to score at least two goals in both legs of a semi-final in a major European competition since Klaus Allofs for Cologne back in the 1985-86 UEFA Cup.

More importantly for United, the experienced striker is in a rich vein of form, with seven goals and two assists in his most recent six matches. They will need him firing in the final.

Making his first appearance since signing a new three-year contract, Bailly looked composed on the ball but well off the pace without it, giving away five free-kicks as Roma pressed high.

It was not a performance to suggest he will keep his place in the side ahead of Victor Lindelof for the final.

- Man United have reached the UEFA Cup/Europa League Final for the second time, after also doing so in 2016-17.

- Since Dzeko's first match against Manchester United for Wolfsburg in September 2009, only Sergio Aguero has scored as many goals against the Red Devils in all competitions (both nine goals).

- The Italian side won a game against Man United in European competition for the first time since their first meeting with the Red Devils in the 2006-07 Champions League quarter-finals - they had lost five and drawn one since then.

Roma resume Serie A duties at home to relegated Crotone on Sunday. United head to Aston Villa in the Premier League on the same day.