After three nights in hospital being treated for burns on his hands, Haas driver Romain Grosjean was discharged on Wednesday 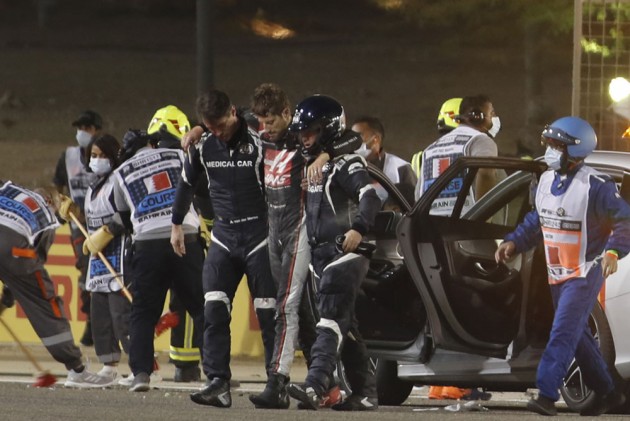 Last Sunday's Formula One race was red flagged on the first lap after the Haas driver made contact with Daniil Kvyat and crashed through a barrier at high speed.

Grosjean's car split in two and became engulfed in flames but he was able to climb out and get to safety. He did not suffer any fractures but was taken hospital for treatment on burns to his hands.

The Frenchman has now been released from the facility and will remain in Bahrain for private treatment.

A Haas statement read: "Haas driver Romain Grosjean was discharged from the care of the Bahrain Defence Force (BDF) Hospital at 10:30 am local time on Wednesday.

"Grosjean spent three nights in hospital following Sunday's incident at the Bahrain Grand Prix. Grosjean will continue private treatment for the burns suffered on the back of his hands and will remain in Bahrain for the time being.

"On behalf of Romain Grosjean and the entire Haas team we extend our thanks to all who have tended to him at the BDF Hospital."

Grosjean posted a photo with reduced bandaging on and said: "The happiness I had when I was told that I didn't need the full dressing anymore and could use my finger was huge. Almost cried. A victory on my way to recovery."

My right hand this morning. The happiness I had when I was told that I didn't need the full dressing anymore and could use my finger was huge. Almost cried. A victory on my way to recovery pic.twitter.com/QuZojM1mZe

Pietro Fittipaldi will stand in for Grosjean at the Sakhir Grand Prix this weekend.

However, according to Haas team principal Gunther Steiner, Grosjean is hopeful of returning for the Abu Dhabi Grand Prix the following week, which would be his final race with the team.