Four days on from a horrific crash at the Bahrain Grand Prix, Romain Grosjean returned to the circuit to reunite with his Haas team. 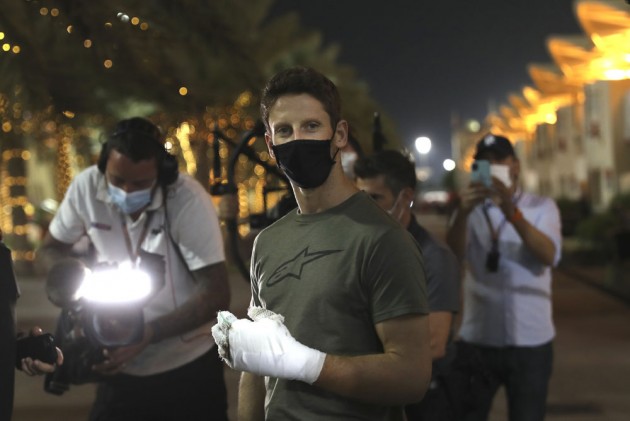 Romain Grosjean has returned to the scene of last week's frightening crash at the Bahrain Grand Prix, an incident which left Ferrari's Charles Leclerc fearing the worst. (More Motorsport News)

The Haas driver's car split in two and became engulfed in flames after making contact with Daniil Kvyat and crashing through a safety barrier at high speed.

He somehow escaped with only burns to his hands and was discharged from hospital on Wednesday.

Just four days on from the crash, Grosjean was welcomed back to the paddock with bandages on both of his hands and his left foot.

Grosjean was greeted by FIA Medical Car driver Alan van der Merwe and FIA medical delegate Ian Roberts, who were the first on the scene and potentially saved the 34-year-old's life.

Another of those to witness the crash up close was Leclerc and the Ferrari driver is amazed Grosjean is still alive.

"I saw the crash in my mirrors, was aware straight away that it was extremely serious and I thought the worst straight away," Leclerc, whose godfather Jules Bianchi suffered fatal head injuries in the 2014 Japanese Grand Prix, told BBC Sport.

"I have to be honest, I didn't have much hope only watching it in the mirrors and I was extremely worried on the radio.

"Unfortunately, there was no news until I got back into the pits and got out of the car to finally know he was out, which I couldn't really believe, especially because coming into Turn 9, I saw the flames and the fire."

The horrifying crash has resulted in changes to some barriers for this coming weekend's Sakhir Grand Prix, which is taking place at the same circuit as the Bahrain Grand Prix, albeit with an altered layout.

No blame was apportioned to Kvyat for the collision, which was not investigated by stewards, but the Russian acknowledged it has been difficult to focus on racing again.

"I saw him making contact and there was not much I could do to avoid that," he said at Thursday's weekly media conference. "Of course I think in the first lap these things happen.

"I was first angry that I saw the car cut across like this. But then immediately I watched in my mirrors and I could see the fire, the explosion.

"It was a very strange emotion, strange feeling. I never saw something like this in all my racing career. To see this, like something you see only in the movies, was a bit shocking to be honest.

"I was a bit worried at first when I came in the pit lane, of course, about him. But then luckily they told me and they showed the footage of him being OK. I was relieved.

"But of course the image stays with you. It wasn't easy to get back in, to be honest. But it's my job so I just pressed the reset button and now go again."