Barcelona committed a Super League project that lasted only two days from its launch, but Ronald Koeman is not concerned 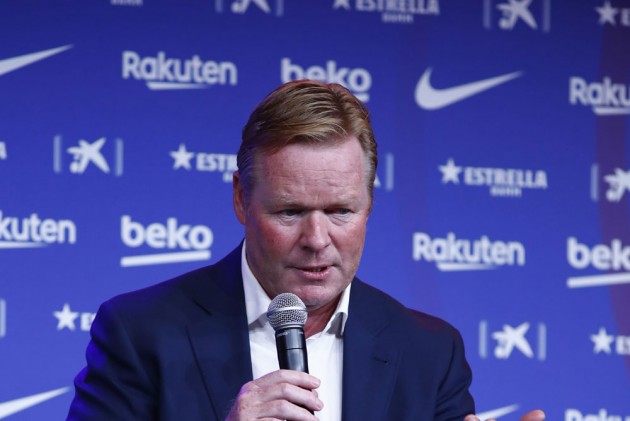 Ronald Koeman does not believe Barcelona's involvement in the collapsed European Super League will have an impact on the title run-in in LaLiga. (More Football News)

Barca were among 12 elite clubs - three of them from Spain - to sign up for the controversial new continental competition over the weekend.

But by Tuesday night, the tournament - a rival to the Champions League - had collapsed after England's 'big six' pulled out and others followed.

The Blaugrana were said to be considering their position ahead of the first U-turn from Manchester City, although no announcement of the Catalan club's withdrawal had followed at Camp Nou by Wednesday when Koeman faced the media.

The head coach was speaking ahead of Thursday's home game against Getafe.

Barca head into the midweek round of fixtures third in LaLiga, five points behind leaders Atletico Madrid and two shy of Real Madrid but with a game in hand over both.

Although Atleti and Madrid were each also part of the Super League plans, it was put to Koeman that his players might be distracted in their pursuit of the championship.

"I don't agree," he replied. "Players want to win titles, I have no doubt about my players. We're going to be fine at tomorrow's game."

Juventus chairman Andrea Agnelli - a key Super League figure - has accepted defeat in their breakaway bid, but Koeman was reluctant to comment on Barca's status as "no one knows what can happen".

"I spoke to the president yesterday and he explained the club's position," Koeman said.

"There's been so much movement that it's best not to have an opinion. No one knows what can happen and we have to wait. I want what's best for the club.

"I'm not the spokesman, it's the president. My job is to prepare the game. There is so much movement with this topic that we have to wait for how this ends.

"I'm not surprised. We want what's best for the club. If there's anyone who needs to talk about this, it's clearly the president.

"I don't know if they asked the players; I'm not interested. We're playing a game tomorrow."

Even those coaches critical of the Super League - like Jurgen Klopp and Pep Guardiola - have highlighted issues with UEFA, which is pressing ahead with its own expanded Champions League.

Koeman said: "The number of matches is incredible. [The players] have had to play a lot of competitions.

"Everyone is talking about the Super League, the Champions League... but UEFA is not heeding players about the number of matches. All they care about is money.

Getafe won 1-0 in the reverse fixture earlier this season but have never done the double over Barca, who have since turned their season around.

Prior to their Clasico defeat last time out in LaLiga, Koeman's side were unbeaten in 19 in the competition. An undefeated run at home stretches back 12 games.

Barca have scored 69 times in the league, their joint-lowest tally through 31 games in the past 13 seasons but also the highest mark in the league this term. Lionel Messi (23) alone has netted more goals than Getafe.

The Blaugrana also bounced back from the loss in Madrid by winning 4-0 against Athletic Bilbao in the Copa del Rey final on Saturday.

"The image of the team the other day in the final was very good, the attitude and the level of play," Koeman added.

"It's not just a title. We've been improving things for a while, and I think, according to a lot of people, they're happy.

"We're working well, but in a club it depends on the results. What we're doing is a big thing."