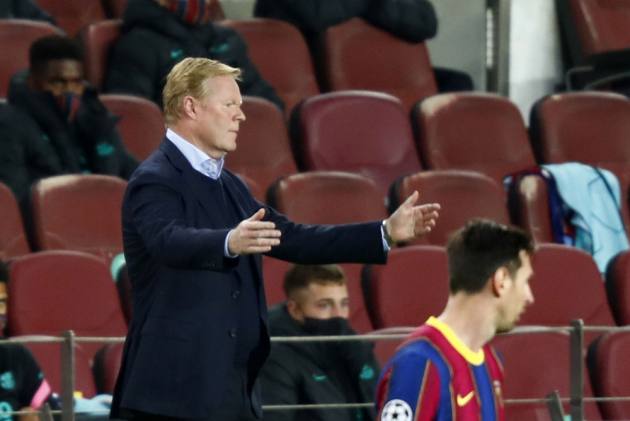 Dembele suffered an "elongation" in the hamstring of his right leg in Saturday's 2-1 loss to Cadiz and is facing another spell on the sidelines.

READ: Barcelona Vs Juventus Live Streaming - Check All The Details

Koeman is unsure how long the injury-plagued Dembele will be out but suggested this latest setback would have been avoided if his side were given a different kick-off slot.

"It's a shame to lose another player to injury," he said at a news conference ahead of Tuesday's Champions League clash with Juventus.

"He noticed something in the second half when he came on. He thought it was nothing but it's a step back considering his history. It's one more reason why I complain about the match schedules.

"I don't know who sets the match schedules, but if you play in Europe on Tuesday, thinking about the Spanish teams, you don't get back from the prior until four in the morning.

"We have played five matches away from home at nine in the night. If you play Wednesday that gives you a day extra to recover, but not when you play on Tuesday."

Barca are through to the last 16 of the Champions League and will seal top spot in Group G if they avoid a three-goal loss, or any two-goal margin of defeat other than 2-0, against Juve.

A victory for the Catalan giants would make it just the eighth instance of a side winning all six group matches, Barca having previously achieved the feat once before in 2002-03.

But they have struggled domestically, a return of 14 points from 10 LaLiga games their lowest tally since 1987-88, and Koeman takes full responsibility for the poor return.

"It is always down to the coach," he said. "He makes the decisions and with his staff decides the team.

"We have to analyse the defeats. It is difficult losing to Cadiz compared to Atletico [Madrid]. You have to look at how they marked us, how we attacked.

"If I am annoyed after a game I will let the players know. I told them yesterday before training that we cannot accept the way we played in certain games.

"What we discuss stays in the dressing room, but there are things we need to improve on. There is not much time to train but we can still seek maximum performance.

"In general, we are a team that creates five or six clear chances every game. We have to find a balance to take advantage of this, while making fewer mistakes."

Tuesday's visit of Juventus could be the sixth occasion that Lionel Messi and Cristiano Ronaldo have met in the Champions League, and their first such meeting since May 2011.

Messi is 3-0 up on Ronaldo in terms of goals in those previous fixtures, but he has been left out of Barca's squad for their past two European matches.

Koeman did not confirm whether Messi would feature against Juve but acknowledged Barca will have to be alert to keep Ronaldo quiet.

"The most important thing is to fight for first place and Cristiano is still one of the best around," Koeman said. "He works every day to stay at the top.

"We have to respect him and must try to keep hold of the ball so he cannot hurt us.

"It is great that both players have maintained this level of performance for 15 years. For me they have been the two best players in the world in recent years.

"Their characteristics are very different but both are very capable of scoring goals, hat-tricks, winning titles - they have both done and won many things."