Ronald Koeman Won't Back Down On Antoine Griezmann's Barcelona Position 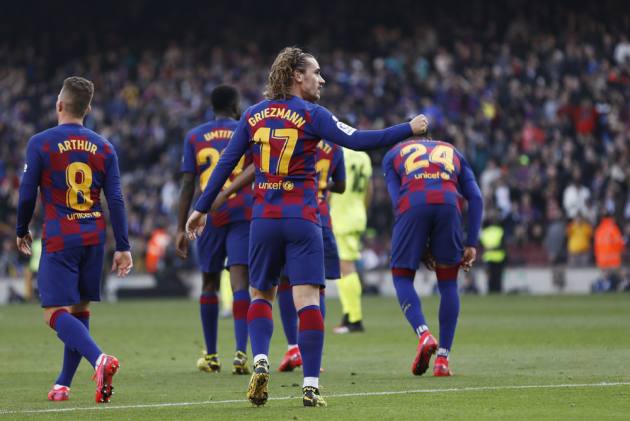 Antoine Griezmann has hinted at displeasure with his role at Barcelona under Ronald Koeman but the new head coach will not cave in. (More Football News)

During the international break France boss Didier Deschamps questioned Koeman's decision to deploy Griezmann on the right wing of a 4-2-3-1 during Barca's first three LaLiga games of 2020-21.

The 29-year-old has registered just one shot on target for the club this season and is yet to create a single chance for a team-mate.

After playing behind a front two of Anthony Martial and Kylian Mbappe in France's 2-1 win over Croatia on Wednesday, Griezmann told TF1: "The coach knows where to put me."

Koeman told reporters at a news conference to preview Saturday's meeting with Getafe that Griezmann must focus on producing his best display wherever he is used.

"Everyone has the right to say what they want. I spoke to him yesterday, but not because of what he said. We talked about his position and his performance," said Koeman on Friday.

"I seek what's best for the team, and if I think that he's better on the right wing with more freedom, that's it.

"He can also play as a number 10 or a nine, but in the end I decide for the good of the team and every player must give their maximum performance for the team."

Asked how Griezmann can improve, Koeman said: "He is doing all he can, which is to work hard, to be disciplined and have some luck. There were four or five attacks in which he had to do better.

"When I was Netherlands coach and we played France, he played on the right. No further discussion is needed on this topic. The coach is in charge and must get the most out of the players.

"I have no problem with Antoine. I never play anyone in a position they can't play. If there's another position that you like, well, we cannot play with 10 players in the number 10 position."

With a Champions League game against Ferencvaros and the first Clasico of the season against LaLiga champions Real Madrid to come next week, Koeman does not intend to use the Getafe game to rest Lionel Messi.

Messi played 180 minutes – including 90 at an altitude of 3,650 metres in La Paz – as Argentina began their 2022 World Cup qualifying campaign with wins over Ecuador and Bolivia.

"It always depends on the player. I ask how they are, if they are tired. This afternoon we have our last training session and we will decide the team for tomorrow," said Koeman.

"He is a player who if he does not play is more tired. He's a winner who always wants to play, but I want to talk with him and the others and see how they are physically.

"He has been playing a very tight schedule for many years. If there is a medical issue or fatigue it is different, but he is capable of playing the next important games that lie ahead."

First-choice goalkeeper Marc-Andre ter Stegen is yet to feature this season after undergoing surgery on his knee and was reportedly aiming to return in time for El Clasico.

However, Koeman does not expect Ter Stegen to be ready for the meeting with Madrid.

"Since Tuesday, he has been training on the pitches and everything is going well for now," said Koeman.

"I don't think he'll be ready for the Clasico. There is no need to set a date. He is a great goalkeeper but we are calm. We are happy with Neto's work."