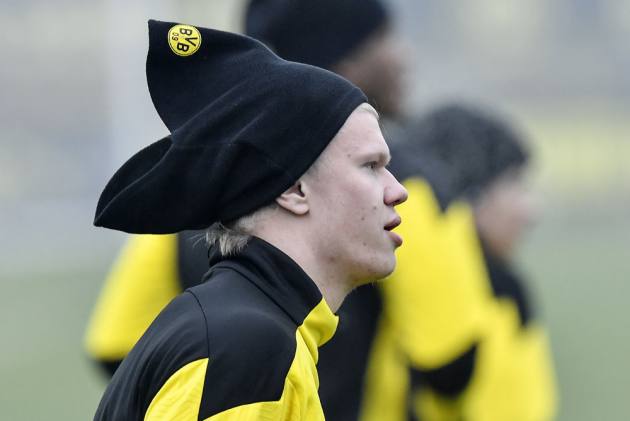 Erling Haaland might be too expensive a purchase for some of football's richest clubs. (More Football News)

The Borussia Dortmund sensation is on everyone's wish list.

The question is who will be willing to meet his reported demands?

Haaland's apparent desire for a €35million annual salary has the likes of Barcelona and Real Madrid thinking twice about a potential move, Goal reported.

The prolific 20-year-old's agent, Mino Raiola, has held informal discussions with both LaLiga stalwarts but the sides did not get into specifics about finances.

For now it appears Barca and Madrid are content to wait it out and see how Haaland's market unfolds.

That is not the case for another potential suitor. According to Goal, an unnamed English club that made inquiries about the Leeds-born striker earlier this year has backed away from talks due to that salary figure.

The mystery team is not Chelsea, who consider Haaland their top target according to an Evening Standard report.

He wants how much?

- While the Blues can hope to land the high-flying Norwegian, Timo Werner may be on the way out. Though the Evening Standard reports Chelsea have not yet seriously discussed selling him, it is not clear how he fits into the Blues' strike force at the moment.

- Gianluigi Donnarumma is out of contract with AC Milan this summer and has had talks with Juventus, per La Gazzetta dello Sport.

- Manchester United have coveted Nikola Milenkovic and may be ready to make a move for the Fiorentina defender, though The Sun says United would not be interested at the rumoured £38m fee.

- United also want Edinson Cavani to have another season at Old Trafford, but at age 34 he might want to move closer to home. Boca Juniors would offer him a two-year deal, says Fabrizio Romano.

- Watford are prepared to bring Ashley Young back to the club should they return to the Premier League next season, the Daily Mail says. Young's contract with Inter is expiring.

- After a loan spell with Paris Saint-Germain, Alessandro Florenzi could be in line to play in Italy with Inter next season rather than returning to Roma, La Gazzetta dello Sport reported.

- Luis Suarez appears likely to remain with Atletico Madrid, but there is a possibility he could rekindle last year's reported talks with David Beckham's Inter Miami. The American side's interest in the Uruguayan "has not stopped," according to Mundo Deportivo.

- One player not headed anywhere is Karim Benzema, who Marca reports will sign to remain with Real Madrid through 2023.