With Lionel Messi coming out of contract, Manchester City have work to do with Kevin De Bruyne 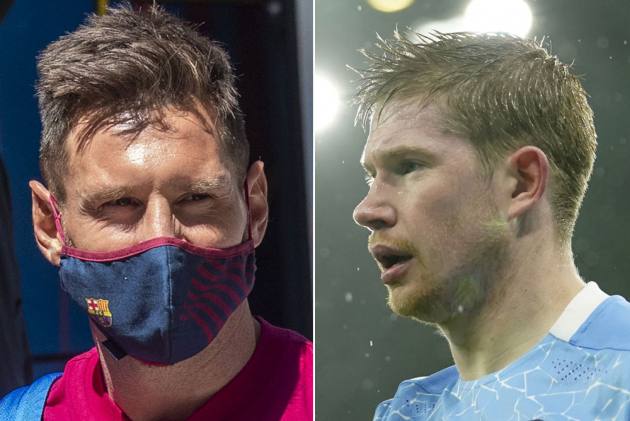 De Bruyne, 29, has been expected to sign a new deal with the Premier League giants, with his contract expiring in 2023.

But with Messi coming out of contract at season's end, City's offer to De Bruyne has seemingly drawn questions.

Manchester City have annoyed De Bruyne with their contract offer, according to The Athletic.

The report says the offer is less than De Bruyne is currently on because of potentially signing Messi. However, the Belgium international is still expected to re-sign.

City have been strongly linked to Messi, who could leave Barcelona at the end of the campaign when is contract is due to expire.

The Barcelona captain has insisted he will not make a decision on his future until the season's conclusion.

- Also coming out of contract is Bayern Munich star David Alaba. The Guardian reports Liverpool are interested in signing the defender, but Real Madrid lead the race.

- Staying at Real Madrid and there is uncertainty over Sergio Ramos' future. With his contract expiring at the end of the season, Ramos will not accept a one-year deal and the defender and LaLiga champions are distant in their bid to reach an agreement, according to Marca. The Manchester Evening News reports City are not interested in Ramos.

- Antoine Griezmann is still yet to find his best form for Barcelona, but Sport reports the Blaugrana are not considering selling the forward.

- Mesut Ozil could be set to leave Arsenal. Football.London reports the playmaker, who comes out of contract in June, is in negotiations with MLS franchise DC United.

- Linked with Juventus and Inter, Olivier Giroud is set to stay at Chelsea, according to Goal. They also claim Juve are considering Sampdoria forward Fabio Quagliarella as an alternative, while Milan look set to keep hold of star midfielder Hakan Calhanoglu.