An illegal practice start proved costly for Lewis Hamilton, though Mercedes still triumphed in Russia thanks to Valtteri Bottas. 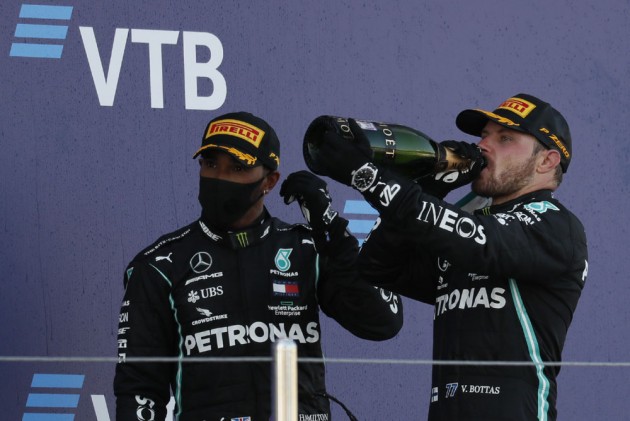 Bottas claimed his second success of a rearranged 2020 season – his other came in the opener in Austria – to close the gap to his Mercedes team-mate in the overall standings.

Championship leader Hamilton had to settle for third place, also finishing behind Max Verstappen, after a pair of time penalties proved crucial to his hopes of glory.

Having coming through what he described as a "horrible" qualifying session on Saturday to sit on pole, the Briton was placed under investigation before the action begun in Sochi after carrying out a practice start outside the designated area.

The six-time world champion held off the challenge of a fast-starting Bottas to retain the lead during an eventful opening lap that saw the safety car deployed, though that was far from the end of the drama.

When racing resumed, Hamilton was informed he had been penalised for his earlier infringement, a 10-second punishment he had to serve while pitting on lap 17 to switch to hard tyres.

He returned to the track down in 11th place and while able to move through the field, his hopes of a third straight success in Russia – a result that would have seen him equal the legendary Schumacher's career tally of 91 victories – had been dashed by that enforced delay.

Still, Mercedes did manage to maintain their 100 per cent record at the track, Bottas staying clear of trouble to prevail as he finished just under eight seconds ahead of Verstappen's Red Bull.

Outside of the podium places, Sergio Perez – who held clear-the-air talks with current employers Racing Point, the team he will be leaving at the end of the campaign – produced an excellent drive to claim fourth.

Daniil Kvyat finished eighth ahead of AlphaTauri colleague Pierre Gasly, while Alex Albon was 10th, the position he had been due to start from before accepting a five-place grid penalty for a gearbox change.