SA Vs AUS, 2nd T20I: This Is Just Unbelievable! Steve Smith's Superhuman Effort Converts Six To A Single - MUST WATCH 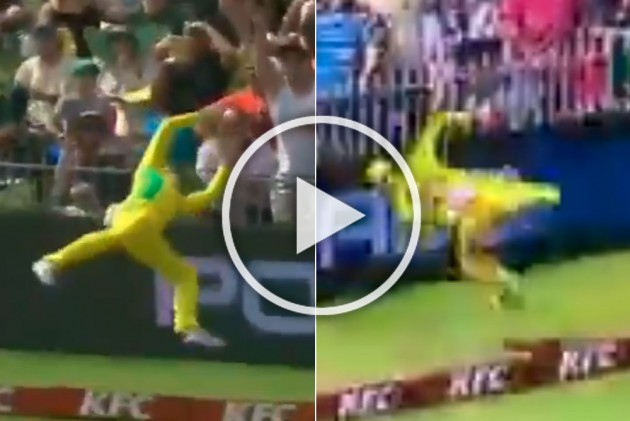 Smith produced an incredible piece of fielding in the sixth over, catching a shot over the deep midwicket boundary from De Kock and throwing it back across the rope before he hit the ground to prevent what looked a certain six.

What happened in the match?

The tourists crushed the Proteas by 107 runs in the opening game of their limited-overs tour on Friday, bowling their opponents out for just 89.

They appeared set to take an unassailable 2-0 lead in the three-match series after restricting South Africa to 158-4 despite Quinton de Kock's 70.

However, they slumped from 98-1 midway through the 13th over to finish on 146-6, well shy of a target perceived to be below par at the halfway stage of the contest.

De Kock struck five fours and four sixes but was eventually caught at long off as Australia fought back, Rassie van der Dussen's 26-ball 37 the other primary contribution as the Proteas' early impetus petered out.

David Warner (67 not out) and Australia captain Aaron Finch put on 48 for the first wicket in 4.4 overs before the impressive Lungi Ngidi (3-41) struck.

Warner and Smith appeared in cruise control, yet both could be considered guilty of not scoring quickly enough and the latter went for 29 off 26 balls when Faf du Plessis raced in from the boundary to claim an excellent catch.

Alex Carey fell to Ngidi for 14 as South Africa's death bowling came to the fore.

Ngidi claimed his third when Du Plessis produced more brilliance in the field, parrying a high shot down the ground to David Miller to remove Mitchell Marsh, though Australia still needed just 20 off the final two overs with six wickets in hand.

Yet Kagiso Rabada drew a leading edge from Matthew Wade at the start of the 19th, during which Warner spent just one delivery on strike.

Australia required 17 off the final six balls but could manage only four, Anrich Nortje bowling Ashton Agar as South Africa completed a fine comeback to ensure the third and final match on Wednesday will be a decider.