Jonny Bairstow won it with back-to-back boundaries, a four and then a big six over wide long-on, to take England to 183-5 and past South Africa's 179-6 with four balls to spare 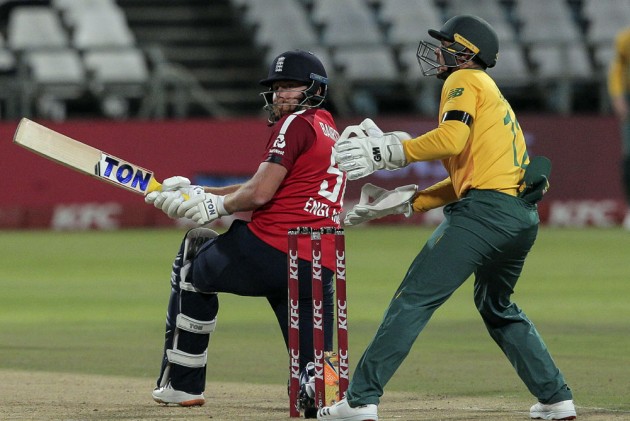 Jonny Bairstow brought England home with an unbeaten 86 from 48 balls against South Africa to win the first Twenty20 by five wickets on Friday. (More Cricket News)

Bairstow won it with back-to-back boundaries, a four and then a big six over wide long-on, to take England to 183-5 and past South Africa's 179-6 with four balls to spare.

England was behind the game through most of its chase despite Bairstow's boundary hitting until the 17th over, when Bairstow and captain Eoin Morgan plundered 28 off left-arm seamer Beuran Hendricks.

That changed the complexion completely at a fan-free Newlands, with England needing 51 runs from 24 balls before the over and just 23 from 18 after it.

Morgan fell for 12 in the next over to a catch at midwicket off Lungi Ngidi but England kept its head, and Bairstow kept smashing boundaries, after being given the opening.

Bairstow hit nine fours and four sixes and was England's match-winner after being shifted from opener to No. 4 to give Jos Buttler a chance at the top of the order.

Sam Curran, who took 3-28 with the ball to lead England's bowling attack, helped out with the bat with a six of his own right at the end, and was 7 not out.

The game was the first international cricket fixture in South Africa since the coronavirus outbreak.

The teams will play three T20s and three one-day internationals on England's short-notice tour, organised to give both teams a chance to play some cricket in a virus-disrupted international schedule.
(AP)