England were set a target of 192 but South Africa failed to defend their highest score of the series, with the visitors reaching the target in 17.4 overs 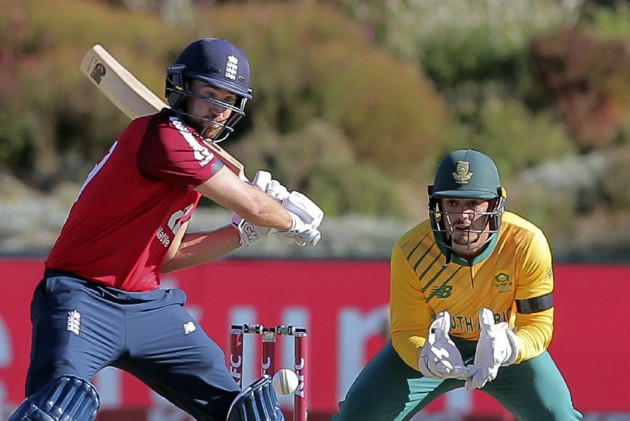 Dawid Malan struck 99 not out as he and Jos Buttler combined for the highest second-wicket partnership in T20 international history to lead England to a 3-0 series win over South Africa.

Having already clinched the series, England were set a target of 192 at Newlands thanks to unbeaten half-centuries from Faf du Plessis (54 not out) and Rassie van der Dussen (72 not out).

That was the Proteas' highest score of the series but still proved nowhere near enough to prevent England from easing to victory with 14 balls to spare as Malan and Buttler (67 not out) put on a devastating 167.

Coming off a half-century in the second match at Paarl, Malan brutally punished a missed run-out by Proteas captain Quinton de Kock with a magnificent innings, he and Buttler taking turns bludgeoning a South Africa attack absent the injured Kagiso Rabada.

Malan accelerated towards his second T20 international century but, needing two to reach three figures, made the mental error of taking the single that got England over the line, leaving him hanging his head at the end of a remarkable display.

That was very, very special. pic.twitter.com/Z1dilFBH83

Du Plessis and Van der Dussen were ruthless in capitalising on a disappointing bowling showing from England with their 127-run partnership, which appeared to have lifted the hosts to a strong position as they recovered emphatically from a wobble that had reduced them to 64-3.

They combined for 10 fours and eight sixes in an innings that left Ben Stokes with a bloodied hand after a seemingly innocuous incident at the boundary.

Stokes was not required to bat, however, as Malan and Buttler rose to the challenge with remarkable ease.

Jason Roy (16) was stifled by the South Africa attack, but England soon hit their stride and produced their best powerplay performance of the series - reaching 56-1 in six overs.

Malan should have been run out in the ninth over when he elected to come back for a second, but an outstanding throw from Temba Bavuma was in vain as De Kock fumbled the ball.

That reprieve allowed Malan and Buttler to reach the 100 partnership in 53 balls. Malan needed only 26 to bring up his 50 and Buttler was not far behind - his half-century arriving in 34 deliveries.

It was Malan who took on the mantle towards the end of the innings, however, his fifth six over long-on putting him in striking distance of a hundred that he was denied after his miscalculation left him stuck on 99.