Jasprit Bumrah (3/50) set the tone for the final morning removing the dogged South Africa skipper Dean Elgar (77 off 156 balls) while Mohammed Siraj (2/47) and Mohammed Shami (2/55) also got into the act. 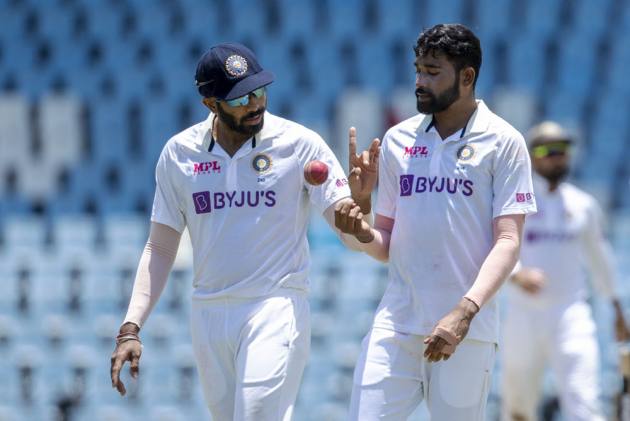 A relentless pace attack led by peerless Jasprit Bumrah put India on cusp of a deserving victory as South Africa were left in the dumps at 182 for 7 going into the lunch on the final day of the first Test.

Bumrah (3/50) set the tone for the final morning removing the dogged Proteas skipper Dean Elgar (77 off 156 balls) while Mohammed Siraj (2/47) and Mohammed Shami (2/55) also got into the act knowing that there is forecast for some rain in the late afternoon session.

Temba Bavuma (34 batting) is fighting it out with Marco Jansen (5 batting) for company but if he can pull off a heist from the current match situation, it would certainly be one of the biggest in the history of South African cricket.

Having gauged the variable bounce of the track, skipper Elgar knew that survival isn't an option and he needed to counter attack right at the onset.

With the stodgy Bavuma for company, 36 runs were added in the first 45 minutes but the best part was that there was no let up in the intensity of the Indian attack as skipper Virat Kohli and wicketkeeper Rishabh Pant were constantly heard cheering the bowlers on.

Shami dropped Elgar off his own bowling but it was Bumrah, who kept on asking probing questions to the Proteas skipper.

One such delivery was angled into the left-hander as he shuffled way too much and leg before was one of the easiest of decisions that umpire Adrian Holdstock had to make in this match.

Hoping against hope, Elgar appealed for DRS but he already knew that he was gone for good.

Quinton de Kock (21) came in and hit couple of delicious shots off Bumrah, trying to knock off as many runs possible off the target.

The hardworking Siraj bowled one with the scrambled seam and just like first innings, tried to cut with very little room for execution with the ball coming into him.

Wiaan Mulder (1), who has had a forgettable match with no wickets to show for his efforts, got a delivery from Shami that was way above negotiable skill-set.

The ball pitched on length while landing on seam. Mulder shaped for one that would come back but it straightened enough to kiss the outside edge off his bat into Rishabh Pant's gloves.