India set a 305 target for South Africa in the first Test at SuperSport Park, Centurion. At the close of play on Day 4, South Africa were 94/4. India need six wickets. 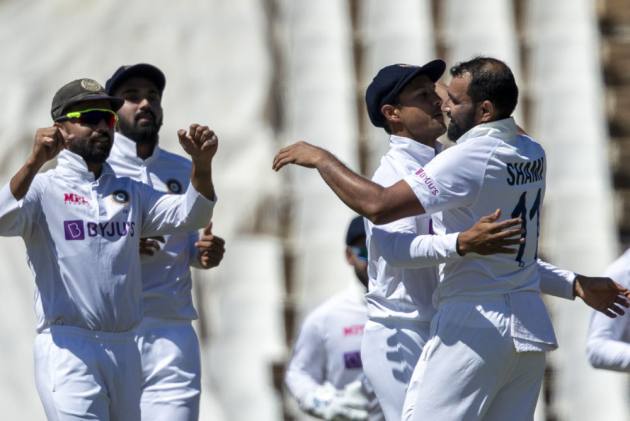 Jasprit Bumrah produced a couple of magic deliveries at the fag end of the fourth day as India remained on course for an emphatic victory against a rattled South Africa in the first Test in Centurion on Wednesday.

The home side would be praying for their captain Dean Elgar's dogged defiance and some rain on the final day on Thursday.

Chasing a never achieved victory target of 305 at the Supersport Park, South Africa finished the day at 94 for 4 with Elgar unbeaten on 52 after Indian batters caved in on a track with uneven bounce, getting all-out for 174 in just 50.3 overs.

It was another failure for the seasoned trio of skipper Virat Kohli, Cheteshwar Pujara and Ajinkya Rahane but the pacers again swung the match in India's favour.

With 211 runs required and six wickets in hand, an intriguing battle could be on the cards on the final day but the Indian team would pray that forecast of a steady afternoon shower on Thursday doesn't come true.

Elgar and Rassie van der Dussen (11 off 65 balls) added 40 runs but more importantly batted for more than 22 overs as the pitch looked like easing down a bit.

Just when the game looked like meandering, Bumrah (2/22) went wide off the crease and got the ball to cut back late just when Van der Dussen decided to shoulder arms thinking that it would go straight.

And then at the stroke of stumps, a lethal delivery knocked the stuffing out of night watchman Keshav Maharaj (8) to leave the Proteas in complete tatters.

Even Mohammed Siraj (1/25) bowled one that was angled in and moved away late taking Keegan Peterson's (17) outside edge. Aiden Markram was the first to be dismissed as he failed to take his bat away from a Mohammed Shami (1/29) delivery that bounced a tad extra after landing on the perfect upright seam.

The Indian bowlers would be aware that there had been instances when they have failed to get the tail knocked off the final day, latest one being the Kanpur Test and here with rain set to be a factor, they will be running against time.

However, it must be mentioned that the cracks had widened and helped the South African pacers in the morning session with some deliveries taking off from back of length.

The use of heavy roller and the Kookaburra getting old by the 15th over did work to South Africa's advantage but only for a limited period of time before the quality and skill-set of Indian pacers found the opposition wanting.

If there is one worry, it's Pujara (16), Kohli (18) and Rahane (20) playing some indiscreet shots while the others were done-in by widening cracks that led to deliveries rearing up awkwardly from short of length.

KL Rahul (23), Rishabh Pant (34) and Ravichandran Ashwin (14) got snorters that grew big on them as Kagiso Rabada (4/42), debutant Marco Jansen (4/55) and Lungi Ngidi (2/31) looked menacing during the one and half sessions that the Indians batted.

South Africa have more than 140 overs to score 305 but on this Supersport Park track, it will be a herculean task to make a match of the target with highest successful chase here being 251 by England back in 2000-01.

The Indian team certainly owes it to openers on Day one and the ever-consistent fast bowling unit that has helped them gain control of proceedings.

Otherwise, the middle-order has cut a sorry picture and more so skipper Kohli, who is promising a lot with some delectable boundaries but the propensity to drive anything pitched fuller outside the off-stump is bringing about his downfall.

Young Jansen, who had impressed the India skipper as a net bowler during their last tour of 2018, would certainly remember his debut as he angled one across at fuller length enticing the skipper to go for a drive.

Pujara once again played a lot of dot deliveries and then tickled one down the leg-side to Quinton de Kock off Ngidi.

The most embarrassing of the dismissals was Rahane's after he had hooked and cover drove Jansen for a six and a four.

The first hook shot was off a bouncer above his left shoulder and the second one was over his right shoulder at a slightly lower height. He couldn't check his pull-shot and holed out at deep square leg.

Had it not been for Pant's counter-attacking run-a-ball 34, India wouldn't have gained the psychological advantage of a target of 300 plus.