Before becoming an umpire, Allahudien Paleker played cricket. A former batter, he played for both Western Province and a Titans team that included the likes of Faf du Plessis, AB de Villiers and Dale Steyn. 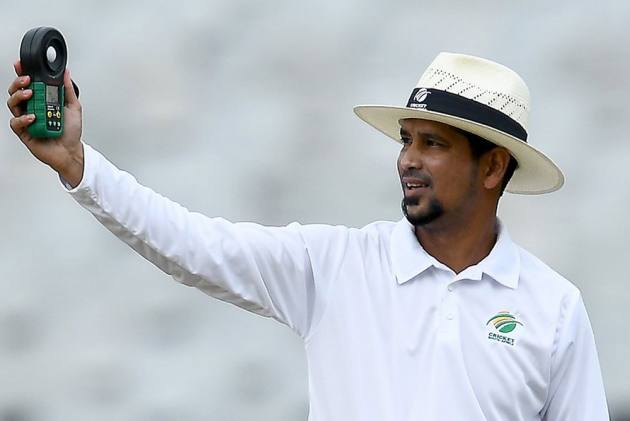 When Allahudien Paleker walks out onto the Wanderers Stadium in Johannesburg on Monday to conduct the second Test match between South Africa and India, a 15-year long pursuit will finally come to fruition, for he will become the 497th Test umpire in the history of the game dating back to 1877. (More Cricket News)

The Cape Town-born official turned 44 on Saturday and he will celebrate his latest birthday by becoming South Africa’s 57th Test umpire. A former first-class cricketer himself, Paleker will line up opposite one of his mentors and inspirations, Marais Erasmus, at the ‘Bullring’ where he will finally reach the top after years of sacrifice and hard work.

“It definitely will be a proud moment for me,” he told Cricket South Africa. “You know when you start umpiring, your dream and your goal is to get to the highest level and to stand in a Test match.

“When you start umpiring, your dream is to get to stand in a Test match."

“I started umpiring 15 years ago, so it’s been a long time coming. It took a lot of hard work, a lot of patience and you need strong support from family as well because of the time you sacrifice being away from home.

“I haven’t attended a family function or wedding in summer for years because I’m just never available.

“So there’s a lot of sacrifice when it comes to that and my wife Shakira has had to endure a lot too. I must also thank her for the support and patience she has shown through my journey, she has really been a pillar of strength for me.

“And now with the pandemic things have got even tougher. It definitely hasn’t come easy and it will be a moment to savour for all of us.”

According to CSA, Paleker comes from a family of umpires. His father Jamalodien is an umpire, who still officiates for Wynberg High School in Cape Town.

He is currently in his 70s and umpired in competitions such as Cricket South Africa’s Club Championships in the mid-1990s.

He also has an uncle who also still umpires, whilst two of his cousins are also developing umpires.

“My dad was a big inspiration for me to get to the top and to fulfil his dream, which he couldn’t get to,” Paleker said. “He always wanted to be a first-class umpire but never got there for various reasons, so I followed in his footsteps to almost carry the baton forward.”

Apart from his father, two other men have had a significant impact on his umpiring career.

“I really look up to are Aleem Dar, who I spent a week with in 2012 in New Zealand,” he explained. “We’ve been in touch with each other since then and he’s a huge inspiration for me. And then domestically we have our very own Marais. He’s an elite umpire and what he’s achieved over the last few years is amazing. You want to reach his levels.”

Before becoming an umpire, Paleker also enjoyed a playing career that spanned seven years. A former batter, he played for both Western Province and a Titans team that included the likes of Faf du Plessis, AB de Villiers and Dale Steyn.

After not being offered a new contract in 2006, he consulted with a young Erasmus and was advised to start umpiring immediately. He did exactly that and joined the Northerns Cricket Umpire Association later that year, overseeing club cricket.

In 2007, Paleker was invited to the SA Universities Week and ended as the third best umpire. He continued building his experience through club and tournament cricket over the next two years, before joining a CSA umpires pilot panel in 2009.

“Even though it was a long wait, I stayed patient and continued to learn through each stage,” he said.

During that pilot period, his first-class debut followed in 2009, followed by a few other matches in between. Paleker was then promoted to the reserve list panel where more first-class opportunities beckoned, prior to his next major step in 2013 – the CSA elite umpires panel.

Since then, he has gone on to stand in 79 first-class games, although his step-up to Test level is not too unfamiliar.

He has already umpired 29 Twenty20s since his 2018 international debut – also between South Africa and India – as well as three One-Day Internationals. Furthermore, Paleker has been the man in the middle in 13 Women’s ODIs and four Women’s T20Is.

What will make his Test debut even more special is having his father watching him live at the Wanderers.

“As an international umpire you would normally officiate a Test match only overseas, but because of Covid-19 I’ll be here and that means it’s an opportunity for my dad to be there,” he added. “I’ve been lucky in that sense because it means he would have now been there for all three of my first internationals as he was there for my ODI and T20I debuts as well.”

Even though the journey to become a complete international umpire ends for Paleker on Monday, a new quest begins as he aims to follow in the footsteps of Pakistan’s Dar and Erasmus begins.

“They have been successful at the top level for a number of years and it is something I need to aim for as I start out as a Test umpire for South Africa,” he concluded.