SA Vs IND Test Series: Is BCCI Gagging An Angry Virat Kohli? Rahul Dravid Is Not Too Sure

Virat Kohli kicked up a storm by stating that he was never asked to reconsider leaving the T20 captaincy as asserted by BCCI president Sourav Ganguly, a claim also made by chief selector Chetan Sharma. 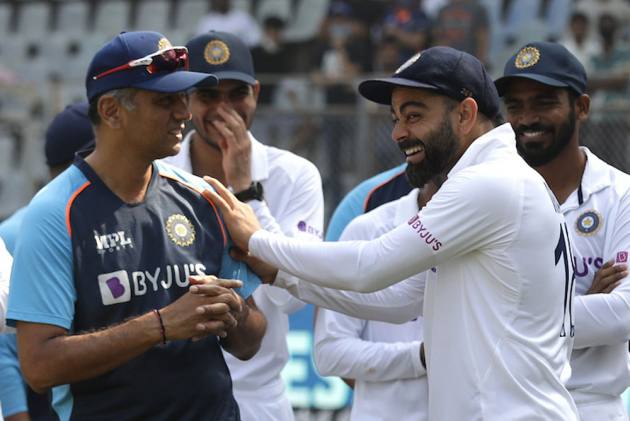 India are on the cusp of winning their first-ever Test series in South Africa, but the build-up to the second Test in Johannesburg is overshadowed by the captaincy controversy involving Virat Kohli and the powers that be in the BCCI. (More Cricket News)

On the eve of the Wanderers Stadium match, India head coach Rahul Dravid tried to calm the frayed nerves and hailed the skipper as "fantastic" despite "all the noise around him".

"I know there's been a lot of noise on other issues outside of the group, even leading into this particular Test match. But honestly, in terms of keeping the morale high, it's not been very difficult because it's been led by the skipper himself.

Virat Kohli leaving the T20 captaincy and the subsequent sacking as the ODI skipper of the national team created a massive divide in the Indian camp.

On Sunday, chief selector Chetan Sharma contradicted Kohli's version by saying that everyone, including BCCI office-bearers, had asked Kohli to reconsider his decision to leave the T20 captaincy, a claim also made by the BCCI president Sourav Ganguly.

It's worth noting that Kohli had indeed questioned Ganguly's claims while also saying that he was informed about his sacking from ODI leadership only 90 minutes before the Test squad selection for the tour of South Africa.

Since dropping that bomb shell, Virat Kohli has not been addressing the media. It only added more fuel to the controversy with no one outside the BCCI corridors knowing what really happened.

But Rahul Dravid, always known for his calm demeanour, played down Kohli missing or rather avoiding the media, and said that "there is no specific reason for that."

"I don't decide this but I am told he will be speaking on eve of his 100th Test. Then you can ask all the questions on his 100th Test," the former India captain said.

The third match of the series will be Kohli's 100th Test.

India lead the three-match series 1-0 after winning the Centurion Test by 113 runs.