At lunch on day 2 of the third Test, South Africa were 100/3 in 35 overs in reply to India's 223 all out. Jasprit Bumrah and Umesh Yadav got rid of Aiden Markram and Keshav Maharaj. 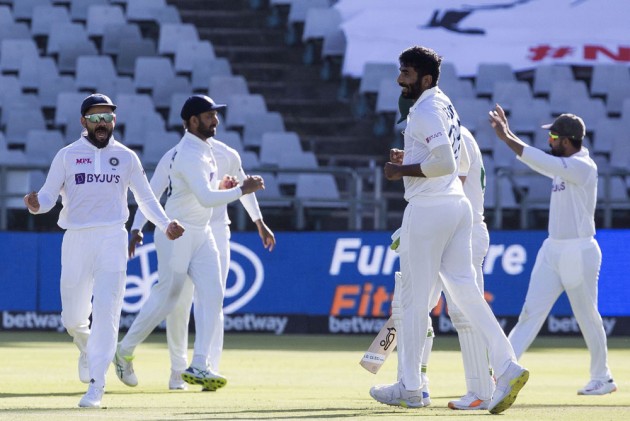 Promising young batters Keegan Petersen and Rassie van der Dussen looked confident in their 55-run unbroken stand for the fourth wicket as South Africa reached 100 for three at lunch on the second day of the third and final Test against India.

For skipper Virat Kohli, quick wickets are need of the hour as he won't be able to concede a big first innings lead while defending a below-par first innings score of 223.

There were a couple of times, Shardul Thakur (6-1-21-0) did find the outside edge of Petersen's bat but on both occasions, the ball died down before skipper Kohli at first slip.

The bounce available on the Newlands track isn't as steep as it was at Centurion and Wanderers which belong to the Highveld region.

Perhaps, standing up a few yards ahead especially to someone like Shardul who is just about skiddy medium pace perhaps would have been an ideal decision.

The morning started on a bright note for India as Markram got a beauty from Bumrah that jagged back enough to hoodwink him and take the off-stump away when the batter must have thought that it would just go straight.

Maharaj, on his part did a very good job and played out the first 45 minutes before Umesh bowled a classical inswinger that uprooted the middle stump.

Petersen however kept his positive intent as he struck seven boundaries in his 86 ball knock so far while Van Der Dussen was ready to play the waiting game in contrast to his second innings show at the Wanderers.