At Tea on Day 1 of the third and final Test against South Africa, India were 141 for four with captain Virat Kohli and Rishabh Pant unbeaten on 40 and 12 runs respectively. 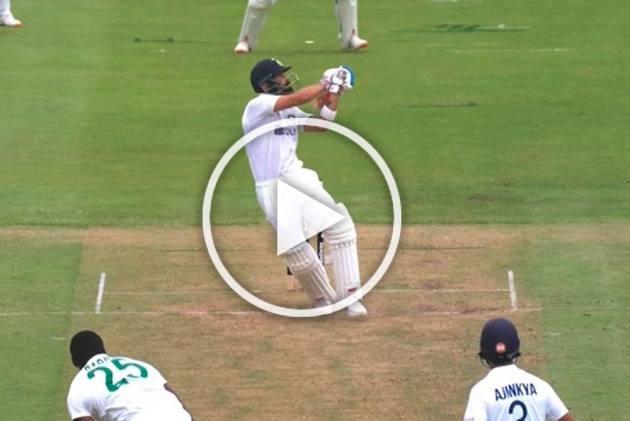 Kohli, who missed the second match due to a back spasm, won the toss and elected to bat first. But his decision backfired as India lost both the openers cheaply, inside the first 13 overs.

Kohli and Cheteshwar Pujara then added 62 runs for the third wicket, but the latter departed in the 38th over for 43 off 77. Then Ajinkya Rahane became the fourth wicket, out for nine off  12 in the 43rd over, to leave India at 116/4.

But Kohli kept one end safe with a patient innings, and was unbeaten on 40 at tea with India struggling at 141/4 (54).

During his 139-ball knock, the right-handed batter hit five fours and one six. That maximum, a top-edge off Kagiso Rabada in the 41st over, was only the second for Virat Kohli in 26 innings in Tests since January 2020.

Cricket statistician Mohandas Menon revealed that this was only the fifth six in Test cricket for India captain in the last three years. And in that period, Rohit Sharma, Mayank Agarwal and Rishabh Pant have hit 31, 25 and 18 sixes respectively.

A rare six for Virat Kohli in Tests!
Today his six at Cape Town is the only fifth in the last three years!
During the same period Rohit Sharma, Mayank Agarwal and Rishabh Pant have hit 31, 25 & 18 sixes respectively!#IndvSA #IndvsSA #SAvIND #INDvsSA

It was also the first away six in Test cricket for the 33-year-old since he top-edged Jos Hazlewood in the Perth Test.

Kohli hasn't scored a century in international cricket in more than two years. Batting Sunil Gavaskar, on air, said that this knock "is the hardest 40 runs Virat Kohli has scored in the last 5-6 years."

India won the first Test by 113 runs but the Proteas hit back to claim the second match by seven wickets to level the series.