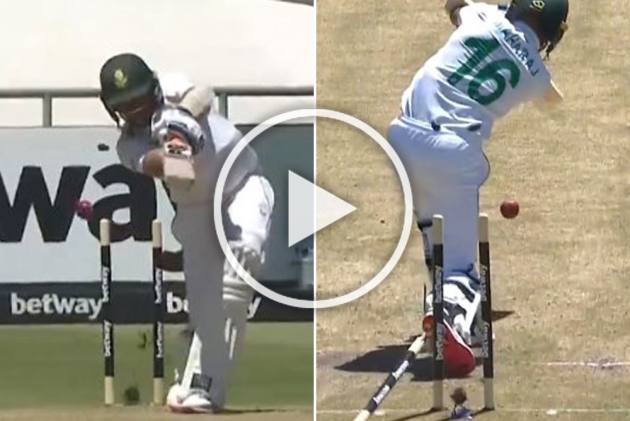 After missing the first two Test matches against South Africa, India pacer Umesh Yadav returned to the playing XI as injured Mohammed Siraj's replacement for the Cape Town clash. And the 34-year-old made his presence felt with two early wickets in the Proteas' first innings on Day 2 at Newlands.

After managing 223 runs in their first innings, India needed early wickets. Jasprit Bumrah struck in the fifth over to remove Proteas skipper Dean Elgar late on Day 1. The Mumbai pacer then gave India a bright start on Day 2 by getting the wicket of Aiden Markram.

Then Yadav took over and got the wickets of nightwatchman Keshav Maharaj and Rassie van der Dussen, thus breaking two crucial stands of 67 and 42 runs.

But the stand-out wicket was that of Marahaj in the 21st over. The nightwatchman was proving more than a capable bat, surviving more than 40 deliveries. But Yadav produced an unplayable delivery to get rid of Maharaj.

With a hint of movement, the ball nipped back to breach Maharaj's defence. And it sent the middle stump flying. Watch it here:

Earlier, at the toss, India captain Virat Kohli explained why the team he chose Yadav ahead of more experienced Ishant Sharma for the match.

"Umesh has been very potent with the ball recently, very handy in the field and with the bat as well. It was a tough decision to choose between the two," said Kohli.

India are chasing their maiden Test series win in South Africa. India won the first Test by 113 runs then lost the second by seven wickets.