India captain Virat Kohli and South Africa pacer Kagiso Rabada revived their famed rivalry on Day 1 of the third Test in Cape Town. Rabada got the wicket of Kohli, who hit a half-century of the highest order. Here are most stats... 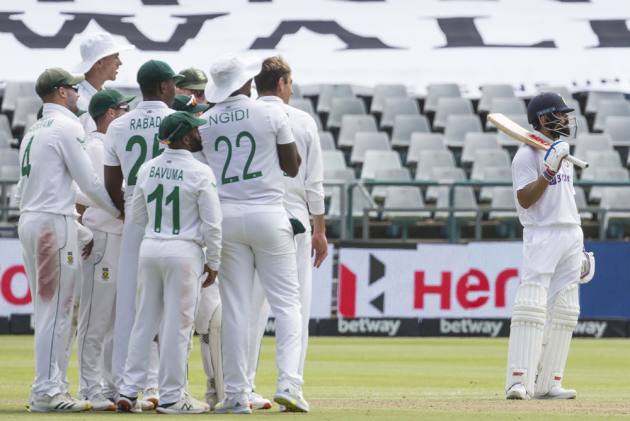 Kagiso Rabada became the 23rd South African and 299th player overall to appear in 50 or more Test matches. The third and final Test match which started at Newlands, Cape Town on Tuesday (January 11) is the 50th Test match for the right-arm fast bowler.

The 26-year-old from Johannesburg, who made his Test debut against the same country at Mohali on November 5 in 2015, took six years and 68 days to reach this landmark.

WATCH: Rare Sight As Kohli Hits Rabada For A Six

** South Africa lost the toss for the third time in this three-Test series. South have won the toss only once, against Pakistan at Karachi in January 2021, in their last 16 Tests. They have won six, lost nine in the last 15 Test played before this Test match.

** South African pacers sent down 24 dot balls before taking the first Indian wicket. South Africa's change bowlers too were keeping the pressure up. Lungi Ngidi and Marco Jansen strung together 20 dot balls between the 15th and the 19th overs.

** Virat Kohli’s innings have been of utmost restraint seen of any batter in Test cricket in recent years. South African pacers tested him with 68 balls outside off out of the first 100 balls they bowled at him in this innings. Kohli left alone 44 of those balls. The 64.70 was his percentage leave to balls arriving outside off, or wider, in the first 100 balls he faced ranks fifth out of over 1100 innings of 100-plus balls by any batter in the last five years.

** Virat Kohli completed his fifty off 158 balls with seven fours and one six at a strike rate of 31.64. This is his slowest 50 plus innings in Tests and fourth fifty in 23 innings of 14 Test matches against South Africa and 28th overall in 167 innings of 99 Tests.