Chasing 212 runs for victory, South Africa are 101/2 at the stumps on Day 3 of the third and final Test against India in Cape Town. The hosts need 111 runs to win with Keegan Petersen batting on 48. 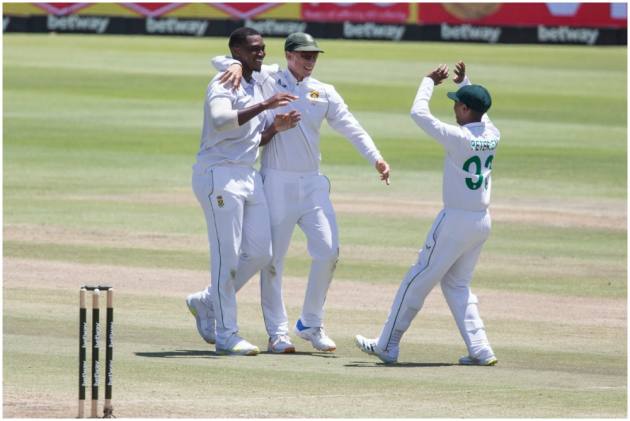 Elgar was caught plumb by spinner Ravichandran Ashwin in front of the stumps and umpire Marais Erasmus raised his finger. But the decision was overturned with the ball tracker suggesting that the ball would have gone over the stumps.

There was drama and constant chatter by captain Virat Kohli, his deputy KL Rahul and ace off-spinner Ashwin, who seemed to suggest that broadcaster Supersport TV rigged DRS on stump mic.

“Reactions like that show a bit of frustration. And sometimes teams capitalise on that. You never really want to show too much emotion, but I guess we could see clearly right there that emotions were high,”

Ngidi said during the media interaction after the end of the third day’s proceedings.
A fuming Kohli showed his anger at the end of the over, going up to the stumps and saying: “Focus on your team as well when they shine the ball eh, not just the opposition. Trying to catch people all the time.”

Ashwin was also caught saying: “You should find better ways to win Supersport”, while India vice-captain was heard commenting: “Whole country playing against XI guys.” Ngidi said it was clear that Indian camp was rattled.

“That probably tells us that maybe they are feeling a little bit of pressure. That was a good partnership for us as well. So they really wanted to break that partnership.

“Those feelings ended up showing there. But at the end of the day, I think everyone reacts differently to certain situations and probably what we saw there, probably how those guys were feeling at the time,” Ngidi said.

Backing the DRS system, Ngidi further said: “Yes (we trust DRS).” “I mean, we’ve seen it on numerous occasions being used all around the world. It’s a system in place and that’s used in cricket,” he added.

Chasing 212, Elgar and Keegan Petersen (48 batting) put on a crucial 88-run stand for the second wicket before the skipper got out to Jasprit Bumrah at the stroke of stumps on day three. South Africa now need 111 runs with eight wickets in hand.

“I think everyone’s still in the game to be honest with you. If we would have a 60-run partnership upfront tomorrow morning that puts us in a good position. But if they take a wicket then the balance shifts to them. So I think it’s perfectly poised at the moment. Tomorrow's morning session is going to be really important,” he added.