India, who have won the regional football tournament seven times out of the 12 editions, open their campaign against Bangladesh on Monday. 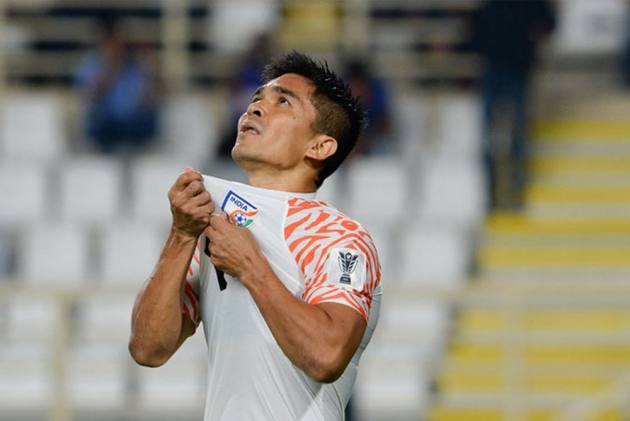 Talismanic captain Sunil Chhetri on Saturday said despite "a little bit of superiority" India enjoy over the South Asian countries, all the opponents in the ongoing SAFF Championships will be tough and his side will play each match like a "war to fight". (More Football News)

India, who have won the regional football tournament seven times out of the 12 editions, open their campaign against Bangladesh on Monday.

The five-team tournament began on Friday with Nepal and Bangladesh beating Maldives and Sri Lanka by identical 1-0 margins respectively.

"All the matches will be tough. Despite a little bit of superiority we many have, every game will be like a war to fight. We have to fight to the last minute. We cannot play 90 per cent," Chhetri said during a virtual press conference.

The captain, however, conceded that his team has not been at its best in the two international friendlies against Nepal in Kathmandu last month. They drew one and won the other.

"If we are talking about the two matches against Nepal, we have areas to improve and the head coach has conveyed that to us about that. We could have done better.

"Bangladesh have changed their coach (after World Cup qualifiers) but they are very difficult side. In the two matches we played against Bangladesh in the last three-four months, it has been very tough. All the teams in the region have improved.

Head coach Igor Stimac said the SAFF Championships, which ends on October 16, will be the last opportunity for the players to play international matches before the start of the third round of 2023 AFC Asian Cup qualifiers in February next year.

"We could not have a proper camp due to the circumstances. The AFC and SAFF have been forced to organise tournaments outside of the FIFA window (due to the pandemic) and we had to have an understanding with the ISL clubs to release players outside the FIFA window as they also want to do well.

"We said our national team will give up November and the ISL clubs to release players in September and October. We are thankful to the ISL clubs (for releasing the players for SAFF Championships)."

Stimac said it's an advantage for the team having players from the Bengaluru FC and ATK Mohun Bagan who had recently played here during the AFC Cup.

"After playing in the AFC Cup, the BFC and ATK MB players also had their pre-season, so it's an advantage while most of the other ISL sides are yet to have pre-season. So, we have to decide how many minutes we have to give to the players during the 90 minutes.

"But we are in the favourite position to win the tournament and we will justify ourselves."

Stimac also talked about the danger of players getting injured while training at the artificial pitches in Male, while Chhetri said the grounds were not "free flowing".

"We are here four days before first match. The training grounds are different here -- artificial and natural pitches. Injuries can happen on changing these pitches, we have to be careful. We are at an island and have to come to Male by speedboats and that made it even more difficult."

On Udanta coming back in the team after missing matches against Nepal, Stimac said, "We have seen a different Udanta in the AFC Cup for Bengaluru FC, in his natural position where he was not playing in the past. He came back to his best."

"That is what we want to see from Udanta, direct striking with full speed, executing chances and making chances. Every player will get chances here.

"We need to organise in a disciplined way and come back quickly after losing the ball."

Stimac said the 2022 World Cup qualifiers matches against Oman and Asian champions Qatar were the best matches after he took charge of the team in the middle of 2019.

"In the last two years, we are trying to come to point where we need to start thinking only about ourselves, not to change our game in regards to our opponent."