The five-team tournament began on Friday with Nepal and Bangladesh beating the Maldives and Sri Lanka by identical 1-0 margins respectively. 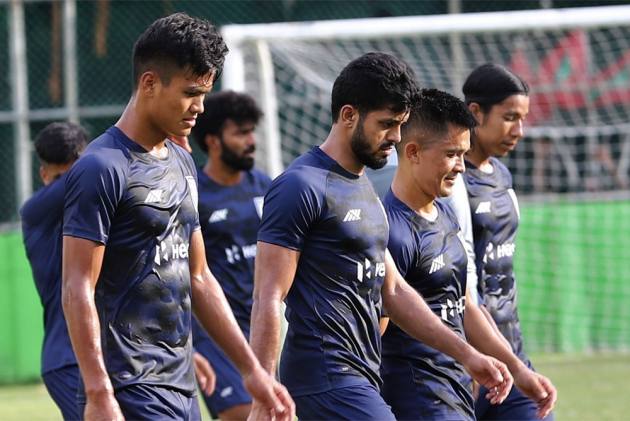 Title favourites India begin their SAFF Championships campaign against a plucky Bangladesh on Monday, knowing fully well that they are just "a little bit superior" than their opponents despite the domination in this regional tournament. (More Football News)

India have won the tournament seven times out of the 12 editions but by the own admission of their talismanic captain Sunil Chhetri, every match will be like a "war to fight".

Bangladesh have been tough customers for India who had needed a late equaliser in the first leg of the 2022 World Cup qualifiers match in Kolkata to draw 1-1. The Blue Tigers had though won the second leg 2-0.

"Bangladesh are very difficult side. In the two matches we played against Bangladesh in the last few months, it has been very tough," Chhetri had said.

"All the matches (of the tournament) will be tough. Despite a little bit of superiority we many have, every game will be like a war to fight. We have to fight to the last minute. We cannot play 90 per cent."

The five-team tournament began on Friday with Nepal and Bangladesh beating the Maldives and Sri Lanka by identical 1-0 margins respectively.

Head coach Igor Stimac is taking the SAFF Championships, as the last opportunity for the players to play international matches before the start of the third round of 2023 AFC Asian Cup qualifiers in February next year.

He has not minced words in declaring that India are the favourites to win the tournament, saying "we will justify ourselves".

"The first game is always the most difficult game. Bangladesh are a known opponent, but we respect them immensely. In fact, we respect each and every team playing out here, and they have an equal chance to win the tournament,” the coach said.

Stimac made no secret that he will be making the most out of the ATK Mohun Bagan and Bengaluru FC players, having played in Maldives earlier in the AFC Cup.

"We rely on Bengaluru FC and ATKMB players because not only they played here a few weeks back, but they started work with their respective clubs. And they had enough training sessions, and games in their legs. So their engines are good for such a tournament," he said.

"We need to be careful as to how many minutes we give to each player corresponding to what they can do at the moment with regards to endurance capacities."

Chhetri said the message from our coaching staff and head coach is very clear that the players have to minimise mistakes.”

"It is more and much more about how we play. We have to make sure that in every game no matter what, we give 100 percent. We cannot be complacent," he said.

Chhetri, a veteran of 16 years in international football, said he doesn't want to lose any game for the country.

"When you are young you play for a lot of things. As you get older, a lot of them diminishes. I've played over 100 games for India, I don't have another 100 and I want to make the most of all the games I have left.

"I want to win a game if I am playing for my country. Both the games against Bangladesh have been extremely difficult ones. I don't want to lose any game for my country," he said.

Other than Chhetri and goalkeeper Gupreet Singh Sandhu, Pritam Kotal was also a part of the triumphant squad in 2015.