Seven-time champions India are the overwhelming favourites to win the 2021 edition of SAFF Championship in the Maldives. Check tournament and telecast details. 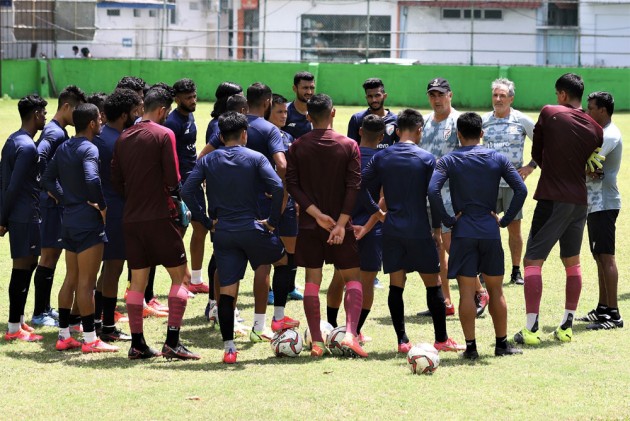 The Blue Tigers are the perennial favourites, winning seven times in the 12 previous editions. On four occasions, they were the runners-up and had finished third once (2003). After the Dhaka heart-break in 2018, Sunil Chhetri & Co will hope to do one better in Male.

For the record, India have never gone winless in two successive editions. And Igor Stimac's men will be aware of the fact that they had lost to the Maldives 1-2 in the last edition's final.

Also, Afghanistan's exit from SAFF means that India have one fewer title contender to worry about, leaving Bangladesh and defending champions Maldives as main rivals. But even Nepal can spring a surprise, as witnessed during the recent two-legged international friendly in the Himalayan kingdom.

In 2015, a resurgent Afghanistan left SAFF to join a more competitive but nascent Central Asian Football Association (CAFA). But before that, they had appeared in three successive finals, all against India.

The 2021 edition follows a round-robin format with the top two making the final, scheduled for October 16. The five-team tournament began on Friday (October 1). Nepal
and Bangladesh registered identical 1-0 wins over the Maldives and Sri Lanka respectively on match day 1.

No India vs Pakistan

Pakistan, the original hosts of the 13th edition, were rendered ineligible to compete after the country's football body was sanctioned by FIFA. Bhutan pulled out of the tournament at the last minute, citing coronavirus pandemic.

* Schedule and timings as per AIFF.

Head coach Stimac announced a 23-man Indian squad on September 23. Udanta Kumam, who missed the friendlies against Nepal, is making a comeback; while Vishal Kaith was named among the three goalkeepers. But Dheeraj Moirangthem failed to make the cut. Defender Akash Mishra, midfielders Bipin Thounajam and Pronay Halder were also left out.