Competing in her second Olympics, Chanu claimed the silver medal in the 49kg category with a total of 202kg (87kg+115kg) 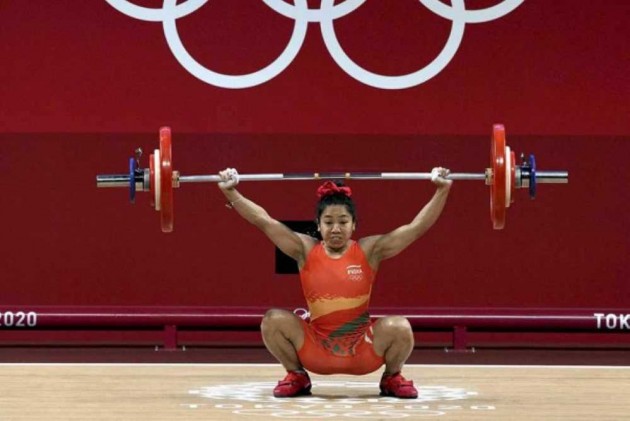 An Olympic medal finally around her neck, star Indian weightlifter Saikhom Mirabai Chanu on Saturday said she can finally take a break at home without worrying about training after managing just five trips to her place in Manipur in the last five years. Tokyo Olympics | Full Schedule | Sports News

"I have just been home for five days in the past five years. Now I will go with this medal," said Chanu, whse family is based in Nongpok Kakching village about 20 kilometres from Imphal.

Chanu revealed that after the Rio Games debacle she changed her training and technique completely so that she could redeem herself in Tokyo.

Competing in her second Olympics, Chanu claimed the silver medal in the 49kg category with a total of 202kg (87kg+115kg). It was India's second Olympic medal in the sport after Karnam Malleswari's bronze that came 21 years ago at the Sydney Games.

"My dream of winning an Olympic medal has been fulfilled today. I tried a lot in Rio, put in a lot of effort but it was not my day then. I thought that day only that I will prove myself in Tokyo," Chanu said during a virtual press conference organised by the Sports Authority of India (SAI).

Considered a strong medal contender five years ago in Rio as well, Chanu buckled under pressure in the women's 48kg event and failed to log a legitimate lift.

"I learnt a lot from that day -- my training and technique was changed, we put in a lot of effort after that," she added.

Head coach Vijay Sharma revealed he was also under a lot of pressure after the disappointing outing in Rio.

"There was a lot of pressure on me after the Rio failure, we failed in a very important competition and we were expected to win then also," Sharma said.

Determined to prove herself in the Tokyo Games, Chanu and Sharma changed the Manipuri's training, employing a more stringent regimen.

"After that we changed the training technique a lot, we saw the result of that in 2017 in the world championship and the Commonwealth Games. She hasn't done anything apart from training in the past six years," Sharma added.

The Manipuri's sole focus for the past five years was on winning a medal at the Olympics and that required several sacrifices including staying away from her family.

The efforts paid off as Chanu went on to win the world championship in 2017 following it with a gold at the 2018 Commonwealth Games.