Sajan Prakash: From Struggling To Execute Butterfly Stroke To Achieving 'A' Cut In 10 Months

Sajan Prakash made the Tokyo Olympic Games 'A' standard, set at 1:56.48 seconds, by 0.10 seconds at the Olympic qualifier. 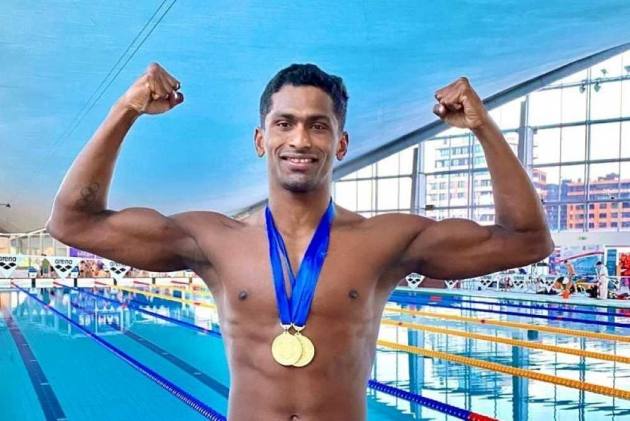 Not long ago, Sajan Prakash was at his lowest, recovering from a slipped disc in the neck, unable to execute even a single stroke of butterfly and miles away from the self belief that he can make the 'A' cut for the Tokyo Games. (More Sports News)

Cut to the present day, the Keralite is being eulogised for becoming the first ever Indian swimmer to earn a direct qualification for the Olympics.

The 27-year-old clocked 1:56:38 seconds in the men's 200m butterfly event at the Sette Colli Trophy in Rome to make the 'A' cut for the Tokyo Games.
The miraculous turnaround began in August 2020.

READ: Who Is Sajan Prakash - First-ever Indian Swimmer To Get Olympic ‘A' Cut

Stuck in Thailand during the lockdown, Sajan had not been inside a pool for seven to eight months. To add to his physical injury, Sajan felt emotionally weak.

It was then that he decided to move to Dubai to train under coach Pradeep Kumar, a decision that empowered him to write a new chapter in Indian swimming.

It all started in 2019 when Sajan felt the pain in his neck but chose to ignore it. Things escalated soon and at the South Asian Games, he was unable to move his left hand.

"The neck pain started during the World Championship in 2019 but I thought it will go away like a miracle. I took painkillers and swam after that I went for many competitions," Sajan said.

"In the SAFF games in Nepal on the day of my event I couldn’t lift my hands. Then I finally went for scans and realised I have the slip disk on my neck C4 C5 C6 that was radiating pain towards my left hand."

After completing rehab, right when Sajan was ready to get back into competition mode, the lockdown stalled his progress.

"I took a break till March for four months I was doing rehab. And then the lockdown happened, I was in Thailand and had no physio support. In August I moved to Dubai, my physio Mr Richard, started helping me. I could see the progress my coach and his wife also helped me."

Often considered the most difficult swimming style, the butterfly requires not only good technique but also strong muscles and Sajan, who was still in pain, struggled with it.

"First three months I couldn’t do a single stroke of butterfly, I wasn’t confident at all because I could feel the pain every time I jumped in the pool. I was swimming only freestyle and sometimes backstroke, was not pushing at all. I started swimming slowly, building up.”

The priority was to become physically fit and mentally strong.

"The first priority for me was to be healthy. I was injured and was not mentally strong. Coming out of that was a big task for me. Strengthening my body and getting mentally strong was my first target to achieve."

"I was having 50-50 belief when I started swimming in Dubai that I’d make the Olympics. Before I got injured, I used to put too much pressure on myself to see the end-result, thinking about the time and that I need to achieve the target.

It wasn't until November-December that the pain subsided and Sajan regained the confidence to go back into the pool.

The result in the Latvia Open in February, Sajan's first Olympic qualifying meet, renewed his confidence that he could still get the direct qualification for Tokyo.

"When I went for the first Olympic qualifier in Latvia, I had not trained much for butterfly. But when I went there and swam bellow 2 mins, the coach and I saw something good happening and we started building on it.”

Since then, he gradually progressed, shaving off more are more time to ultimately achieve the ‘A’ standard last week. But the 27-year-old’s initial reaction after the swim was not of jubilation but was heartbreak.

"When saw the time board I saw the result of the swimmer next to me and I saw 1.50.80 and I was like ‘not again’. Then I realised that's not my time and when I saw my time I felt lighter on my shoulders, I was in tears."