Sassuolo 0-3 Inter: Nerazzurri Capitalise On Calamitous Defending To Go Second In Serie A 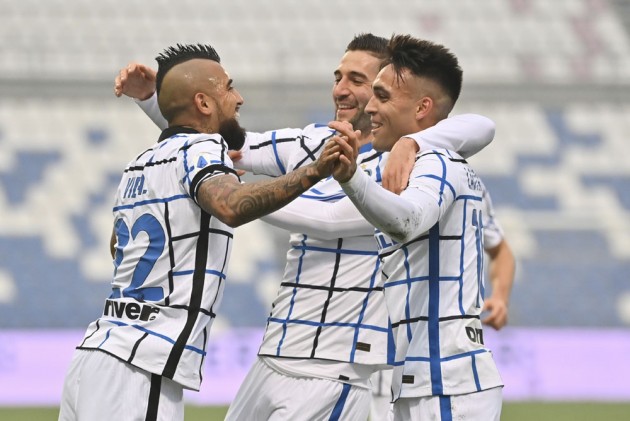 Inter responded to their Champions League loss to Real Madrid by making the most of calamitous Sassuolo defending in a 3-0 win that lifted the Nerazzurri up to second in Serie A. (More Football News)

Antonio Conte's men have been troubled by inconsistency this season and are on the brink of Champions League elimination, but at top-four hopefuls Sassuolo on Saturday they produced a clinical and professional display.

Inter were 2-0 up by the 14th minute as a catalogue of defensive errors led to Alexis Sanchez – partnering Lautaro Martinez in Romelu Lukaku's place – finding the net and Vlad Chiriches' own goal doubled the advantage.

Sassuolo put the visitors under pressure for much of the second half, but Inter's uncompromising rearguard kept them in charge and Roberto Gagliardini made it 3-0 as they moved to within two points of rivals and pacesetters Milan, at least until Sunday.

Inter looked every inch a team with a point to prove early on and had the lead inside four minutes.

Martinez charged down Chiriches' clearance and raced onto Sanchez's subsequent pass, flicking the ball over the approaching Andrea Consigli before outmuscling the Romanian defender and ultimately squaring for his strike partner to tap in.

Chiriches' day got even worse soon after as he headed Arturo Vidal's fierce volley into his own net.

Sassuolo eventually forced Samir Handanovic into a couple of saves via Rogerio and Jeremy Toljan late in the half, though neither were particularly demanding.

But the home side struggled to make the most of their greater share of the possession and the game was effectively put beyond them with an hour played.

Gagliardini latched onto the bouncing ball just inside Sassuolo's penalty area and stabbed a clever volleyed finish into the bottom-left corner.

Lukaku was brought on with 10 minutes to go and quickly found the net after being fed by Arturo Vidal, though an offside call spared Sassuolo.

What does it mean? Inter finding consistency in Serie A as Conte gets it right

While their Champions League form is certainly an area of concern, having claimed just two points from four games, Inter are now unbeaten in five Serie A matches since losing to Milan on October 17.

It was not so long ago that doubts over Conte's future were being raised, but it is fair to say he got his set-up spot-on here. Inter were perfectly happy to allow the hosts to dictate possession, having just 35 per cent themselves, yet they still managed 11 shots and – crucially – scored three times.

Sassuolo were unbeaten in the league this term before Saturday. A 3-0 win in their own stadium is a fine feat for Inter.

Although Inter scored three times, their defence was arguably more crucial than the attack. Milan Skriniar was the standout. The Slovakia international looked to be on the way out at the start of the season due to concerns over his suitability for Conte's system, but he showed his worth again here, making a couple of interceptions and a match-high eight clearances, while he was also tidy in possession.

An unfortunate day for Chiriches

So calamitous was Chiriches' start to the game that it was going to take something special to redeem him. He was not just at fault for the clearance before Sanchez's opener, he was also the defender knocked over by Martinez in the same passage of play, while he then put into his own goal.

He certainly tried to get back on track given he won 63 per cent of a team-high eight first-half duels, completed 90 per cent of his 40 passes and made two tackles and clearances, but injury ended his day just before the interval.

- Inter are, alongside Milan, one of the two unbeaten sides in away Serie A games since last June (W7 D4).
- Sassuolo lost in Serie A for the first time this season (W5 D3 prior to Saturday).
- Sassuolo lost a Serie A home match by a margin of three or more goals for the first time since September 2019 against Atalanta.
- The teams managed by Antonio Conte have scored at least three goals in each of the five Serie A meetings against Sassuolo.

Inter go to Borussia Monchengladbach on Tuesday knowing anything other than a win will see them dumped out of the Champions League, they then host Bologna in Serie A next Saturday. Sassuolo go to Roma a week on Sunday.