Thomas Muller scored twice as Bayern Munich beat bottom side Schalke 4-0 to move seven points clear at the top of the Bundesliga. 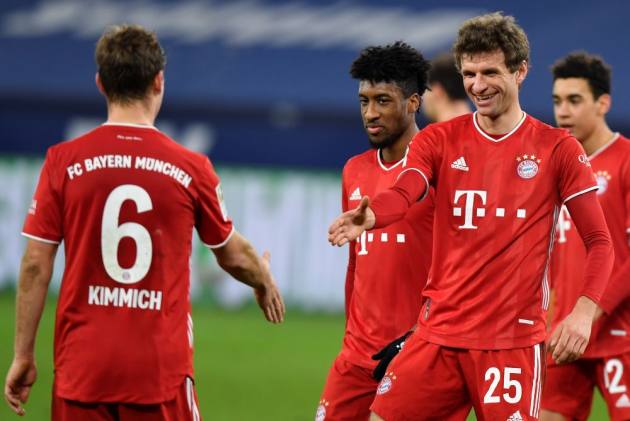 Second-place RB Leipzig suffered a shock loss to Mainz 05 on Saturday and Bayern took full advantage at the Veltins-Arena on Sunday, moving seven points clear at the top.

Schalke are bottom of the table with one win all season but they more than matched the European champions before Muller's 33rd-minute breakthrough.

Muller doubled his tally late on after Lewandowski struck early in the second half, before David Alaba added further gloss at the death to a victory that saw Manuel Neuer keep a Bundesliga-record 197th clean sheet.

Robert Lewandowski's last 8 on the road

vs. Bielefeld
vs. Dortmund
vs. Stuttgart
vs. Union
vs. Leverkusen
vs. Gladbach
vs. Augsburg
vs. Schalke

The first player to score in that many consecutive #Bundesliga away gamespic.twitter.com/8fNCGcUcZN

The division's leading scorer Lewandowski glanced over the crossbar from close range early on before a better chance came and went for Mark Uth, who headed straight at Neuer from five yards out.

Ralf Fahrmann was called into action with a fine double save to keep out Lewandowski's free-kick and Serge Gnabry's follow-up attempt.

Gnabry went close again when glancing the side-netting with a header he should have put away, but Bayern were in front seven minutes later through Muller's powerful header.

The attacking midfielder met Joshua Kimmich's back-post delivery and made no mistake in beating Fahrmann for his eighth league goal of the campaign.

Gnabry thought he had added a quickfire second after Leroy Sane's initial effort was parried, only for the offside flag to go up against the former Schalke winger.

But the Bavarian giants did double their advantage early in the second period as Lewandowski controlled Kimmich's long ball, held off two defenders and slotted under Fahrmann.

It is the 11th successive Bundesliga game in which Lewandowski has scored against Schalke and he nearly added another, dragging wide from 18 yards 20 minutes from time.

Schalke are now without a win against Bayern in 21 league matches and badly faded in the closing stages, with Muller heading in from another Kimmich delivery and Alaba adding a fourth with a 30-yard drive that squirmed under Fahrmann.

What does it mean? Breathing space for Bayern

Bayern were said to be going through a crisis after losing to Borussia Monchengladbach in the Bundesliga and second-tier Holstein Kiel in the DFB-Pokal earlier this month.

But Hansi Flick's men have followed up those defeats with three league victories in a row and are now seven points clear of Leipzig, who have won just one of their last four.

Schalke deserve credit for the way they troubled Bayern in the first half but the defending champions ran away with it late on, scoring four times from their 31 shots - the most they have had in a league game this season.

With his clinical headers in either half, Muller has now bettered his eight-goal tally from last season in the Bundesliga after just 18 games of the current campaign.

The last time the one-club man scored more league goals in a single season was in 2015-16, when finding the net 20 times

Hoppe fails to rise to the occasion

Heading into this game, Schalke forward Matthew Hoppe was the only player to match Lewandowski for Bundesliga goals (five apiece) in 2021.

While the prolific Poland international added to his tally, Hoppe got only one shot away and had just 15 touches before being withdrawn after 72 minutes.

Bayern welcome Hoffenheim to the Allianz Arena in their next Bundesliga clash next Saturday, the same day that Schalke travel to Werder Bremen.