Serena Williams is through to another Wimbledon final and she revealed golf superstar Tiger Woods has inspired her return to the top. 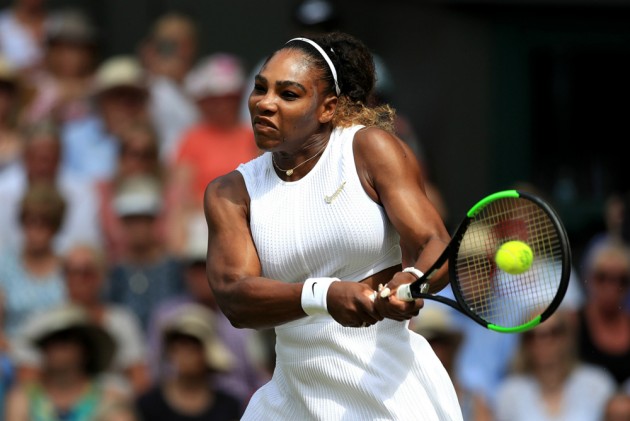 Serena Williams is taking Tiger Woods' Masters triumph as her Wimbledon inspiration as she bids to land a record-equalling 24th grand slam title.

After years of injury agony and torment in his personal life, Woods landed his 15th golf major at Augusta in April at the age of 43.

The chances of Woods winning again at that level had been repeatedly written off, and there have been some suspicions that his fellow American Williams might fall painfully short of matching Margaret Court's all-time grand slam haul.

Williams, though, has never lost belief in her ability to scoop titles at the highest level, and the 37-year-old usually achieves what she sets out for.

Serena Williams and Simona Halep are the only two players to have made a major final in each of the last three @WTA seasons.

They meet in a Slam final for the 1st time on Saturday @Wimbledon. pic.twitter.com/Rq1M4sQQMG

She feels medical technology is extending the careers of sporting greats such as her, and said: "That's the only reason I'm able to compete. I feel like if we had this technology 20 years ago, maybe Michael Jordan would still be playing basketball. I just feel like we know so much more about our bodies.

"Things I do differently now than when I first was on tour, it's lengthening my career. It's not just me, it's Roger [Federer], Tom Brady, Peyton [Manning] played forever. There are so many athletes now that are able to do better and play longer, even play some of their best way after they are 30.

"Those athletes, Tiger obviously, what he did at the Masters, was on top of my mind. Those athletes are incredibly inspiring. That's one thing that keeps me moving forward."

Williams swatted aside Barbora Strycova in their semi-final on Thursday, winning 6-1 6-2 in 59 minutes.

She pointed to her mixed doubles experience with Andy Murray over the past week as a crucial part of her championships, believing it has helped her sharpness around the net.

"I kept telling you guys I thought the doubles would help me," Williams said in her post-match press conference. "I really feel like it helped me, not just for today and this event, but hopefully it will help me in the future."

Williams was in this position 12 months ago, only to lose to Angelique Kerber in the final. And at the US Open she again moved to the brink of the 24th grand slam but was beaten by Naomi Osaka in a controversial title match.

Because she has come so far in her comeback, after giving birth in September 2017, Williams feels better-placed now to manage the pressure of a Wimbledon final.

She added: "I have been, just this whole year, trying to stay fit so I can be able to play in grand slams."

Halep will be no pushover and Williams recognises the former world number one poses a threat.

"There's so many impressive things about her," Williams said. "You can't underestimate her. She's like a little powerhouse."