Sergio Aguero will bid farewell to the Etihad Stadium on Sunday, but was only included among Pep Guardiola's substitutes 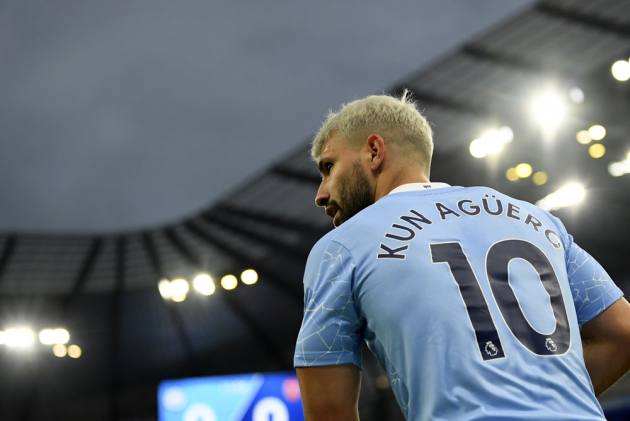 Sergio Aguero will have to make his final Premier League appearance for Manchester City from the bench, with Pep Guardiola naming the departing striker among the substitutes against Everton. (More Football News)

A total of 10,000 fans will be supporting City at the Etihad Stadium, though 32-year-old Aguero, who is reportedly bound for Barcelona, was among nine potential replacements for the champions.

City's all-time record goalscorer has had a season blighted by injuries, having made just eight starts across all competitions.

Aguero, who joined City in 2011 from Atletico Madrid, is the highest scoring non-English player in Premier League history with 182 goals, while he has so far averaged a goal every 109 minutes in the competition – the best rate of any player to have scored at least 10.

Yet it was Gabriel Jesus who got the nod ahead of Aguero. The Brazil forward has scored seven Premier League goals against Everton, more than he has against any other opponent in the competition, including two braces in his previous two appearances against the Toffees at home.

There was little in the way of a second-string line up from Guardiola ahead of next week's Champions League showdown with Chelsea.

Kevin De Bruyne returned to the XI for his first action since the semi-final win over Paris Saint-Germain on May 4, while Riyad Mahrez and Phil Foden were also selected.

Ilkay Gundogan – who sustained a knock against Brighton and Hove Albion last time out – joined Aguero on the bench, although first-choice pairing Ruben Dias and John Stones started in defence.

While City were looking to celebrate their title with a win, Everton headed into Sunday's contest in need of at least a point to keep their hopes of European football for next season alive.

Carlo Ancelotti was without James Rodriguez, who has returned to Colombia to link up with their Copa America squad, and the playmaker's compatriot Yerry Mina.

Everton have lost their past six league games against City, only losing more consecutively in the competition against Manchester United (nine between 1999-2004), though they were boosted by Seamus Coleman being able to make the bench – Ancelotti had initially expected the club captain to miss out through injury.